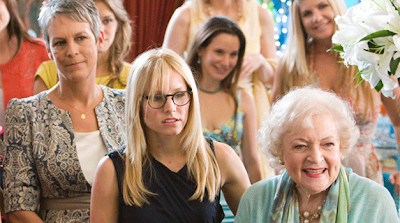 Marni was a bespectacled acned loser during high school who was bullied by the beautiful head cheerleader. She later used her horrible experience as an example to encourage the young account execs at her office. Her ability to take control of her life, her looks and her attitude has made her successful enough to be promoted to VP in their New York office. On her way home for her brother's wedding she discovers that the bride to be is the infamous cheerleader who had made her life holy hell.

Kristen Bell is perfect as Marnie a pretty, not as confident as she thinks young woman who is suddenly confronted with an issue she has never resolved. Marni is taken aback that her family (Jamie Lee Curtis and Victor Garber) just adore their future new daughter in law. She comes face to face with her nemesis JJ who now calls herself Joanna (Odette Yustman) who acts like she doesn't remember Marni. Joanna's parents had died in a car accident and she wanted to change her life and is now going to nursing school, volunteering and in other words is too good to be true. Even the family dog likes Joanna better than Marni. Joanna's aunt Ramona (Sigourney Weaver) owns a chain of famous hotels is footing the bill for a fancy wedding. It turns out the aunt Ramona also happens to be Marni's mother Gail's ex-best friend and arch enemy. At first Marni is thinking that she should give Joanna a second chance before she realizes that Joanna actually does remember. Marni would just like an apology. When that is not forthcoming, she tries to figure a way to show her brother Joanna's true colors.

Andy Fickman directs a handful of very strong women actors with a script by Moe Jelline. The story could have fallen into the trap of women just being catty and mean to each other, but the competent cast keeps the film grounded. As with anyone coming home, you fall into the same mindset you had before you left. Marni can't get over the pain she endured as the ugly duckling becoming clumsy and can't think clearly to subdue her actions. Gail is also feeling competitive with her once best friend and a bit envious of Ramona's success to the point of trying to drag race her on the streets. When both sides of the family take dance lessons from Monique Leroux (Kristin Chenoweth) the women all try to out do the other. The irrepressible Betty White as Grandma Bunny is ditzy and wise which is her usual role in movies these days.

Check out this interview with some of the women from the movie to give you a hint of what to expect:
http://www.funnyordie.com/videos/b7aafedbd7/you-again-cast-fight
(Review by reesa)

Posted by Dallas Movie Screenings at 12:29 AM

Email ThisBlogThis!Share to TwitterShare to FacebookShare to Pinterest
Labels: You Again Review