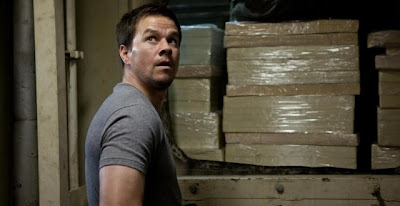 Director Baltasar Kormákur is a well known and critically acclaimed actor in Iceland besides being a director, producer and writer. He starred in 2009 film Reykjavík-Rotterdam from which screenwriter Aaron Guzikowski remade into Contraband starring Mark Wahlberg, Giovanni Ribisi, Kate Beckinsale and Ben Foster. A typical January movie which promises more than it delivers.

Wahlberg plays Chris Farraday who had gotten out of his lucrative smuggling game to concentrate on his wife Kate (Kate Beckinsale) and his two young son by working is own business installing security alarms. His brother in law Andy (Caleb Landry Jones) gets into trouble when he attempts to smuggle in some drugs on a container ship and has to dump the 10 lbs of coke into the ocean when the Custom Border Patrol raids the ship. Andy was doing the job for Tim Briggs (Giovanni Ribisi) the brother of Chris's old smuggling partner who is sleazy mean slimeball of a human being who wants his the full cost of the product. Chris tries to reason with him and pay it back in time as a favor. But Briggs is getting pressure from his bosses who want to get Chris back in the game by giving him 2 weeks to come up with $700,000. Chris goes to see his father Bud (William Lucking) in prison who was proud that Chris is out of his illegal operation, but realizes that he's got to do what he's got to do. So Bud uses his influence to get him papers to work on his ship that's going to Panama. He leaves his shady best friend Sebastian Abney (Ben Foster) to keep an eye on his wife and kids.

Chris refuses to run drugs and opts to smuggle in counterfeit money. The most interesting part of the movie is watching Chris using his well honed skills with the help of his friendly accomplices on board the ship. He doesn't flinch when the Captain (J.K. Simmons) who doesn't appreciate his appearance on his ship due to his reputation and the ships police force all seem to have it in for him. At one time this job used to go smoothly, but there's added pressure due to Briggs terrorizing Kate and the kids to the point where they have to stay with Sebastian. Chris has to do things he would normally refuse which of course goes all sideways like run another operation for Panama bad guy Gonzalo (Diego Luna) before they have to get the fake money on the ship before it leaves the dock.

The first half of the movie sets up the characters and the relationships as well as featuring the back streets and atmosphere of New Orleans. If there was a fast forward button it would have been utilized here. The second half is the smuggling operation where Chris has to be one step ahead of everyone else. Wahlberg has that macho guy he plays in most movies down to a science although he's a more thoughtful actor than the usual types like Jason Statham or Vin Diesel. Beckinsale as the loving wife is needlessly abused by Briggs as a tension getting device. One would think if your husband is running something dangerous for a crazy bad guy and you can't use the police for protection then you would take measures to keep safe and not leave your doors unlocked. Also brother Andy is so frustratingly stupid to keep getting in trouble which of course gets Chris in even more hot water. More satisfying is the ending where everyone gets their comeuppance. It just took too long to get there.
(Review by reesa)