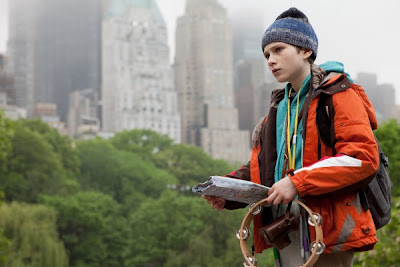 Not everyone really wants to see another 911 movie. The thought of it will probably keep viewers away from the theaters. But they will miss a wonderfully moving and interesting story adapted by screenwriter Eric Roth from Jonathan Safran Foer's 2005 novel about a young boy connecting with his father who died in one of the towers on what 10 year old Oskar calls “the worst day”. Director Stephen Daldry who has worked so well with young actors in Billy Elliot draws out an intense and fascinating performance by new comer and Kid Jeopardy winner Thomas Horn.

Oskar and his family live in NYC with his parents Thomas and Linda. His dad spends a lot of time with Oskar playing a game called Reconnaissance Mission. Thomas likes to stimulate his Asperger's afflicted son precocious mind with puzzles that require him to think and focus. His last charge to Oskar was to find the missing 6th borough of NYC. A year after his father dies in the attack, Oskar discovers a mysterious key inside his father's closet with the name “Black” attached. He thinks it is another quest and transverses the surrounding boroughs by looking for someone by the name of “Black” from the phone book listings hoping anyone recognizes the key. He keeps a complicated chart to track all the people making a plan each day. Oskar with a tambourine in hand to calm his anxieties walks all over the city since he's public transportation phobic. He meets up with Abby and William Black (Viola Davis and Jeffrey Wright) while they are in the middle of an argument. Oskar who normally has a difficult time communicating with people in general meets with various people who connect with Oskar's plight in some personal way or reject his visit completely. With his fast stream of consciousness speech he narrates the story while working out the emotional turmoil that haunts him from the day his father died.

His mother effectively under played by Sandra Bullock was always the outsider in her husband's and Oskar's adventure seeking games. She is working out her own guilt and depression having talked to Tom while she watched the towers burn and collapse from her workplace window. Oskar talks more to his grandmother (Zoe Caldwell) who lives across the street. He becomes friends with the grandmother's mute renter (Max von Sydow) who helps Oskar on his quest. And becomes a sounding board for Oskars' unvocalized rage.

The streets of NYC is like another character in film. The camera follows and generously spotlights those areas that most people don't see. The photography brings the city closer and more real as we follow Oskar's journey. As well as the people who all been touched by the tragedy in some way. Opinions on this movie was been varied from being a contrived over sentimental tear jerking drivel to a wondrous and emotional tale of healing. In any event, Thomas Horn will hopefully continue with this career path as his performance is quite remarkable. This movie is more than just another reminder of that “worst day”. It's a film that shows that we are all connected in our grief and our will to remain.
(Review by reesa)