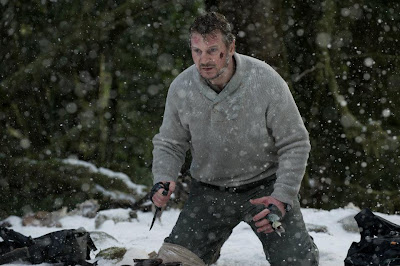 Director Joe Carnahan who wrote The Grey with Ian Mackenzie Jeffers steps away from the frenetic action films like the A Team and Smoking Aces to a more serious and realistic subject. It was produced by Ridley and Tony Scott among others. At first glance it seems like a typical ten little Indians plot where characters are eliminated one by one. Like the red uniforms on Star Trek you don't notice them or remember their names. But Carnahan give the film a more contemplative aura with Liam Neeson's hunter John Ottway moody narration.

Ottway works at the end of the world in the dark winter of Alaska's wilderness for a refinery. As a sharpshooter he's in charge of keeping the pipeline workers safe from marauding creatures like wolves and bears. The roughnecks that are attracted to this type of work in the middle of nowhere are mostly ex cons, fugitives, drifters and @-holes, men not fit for mankind. Ottway keeps himself pretty separate from the rowdy bunch while he is haunted by memories of his wife (Anne Openshaw). He writes a letter to her but doesn't send it. Suicidal Ottway almost gives in to his malaise until he hears the wolves.

At the end of their tour of duty the workers are rotated out and flown back to civilization. The bad winter rocks the plane and quickly they are descending to their doom. Most of the men are panicking but Ottway despite his fear buckles himself to both seats in the most horrific plane crash filmed to date. Ottway finds himself in the middle of snow storm with only a sweater on. Dazed and walking to access his situation he finds the wreckage burning, bodies everywhere. The survivors in shock, cold and injured are helped by Ottway's instinctive survival skills. That is until they realized that they are surrounded by wolves. Lots of wolves. Everyone is of different opinions of what to do next but when one of the men is dragged off by a wolf, then they agree with Ottway to make it to the tree line and walk out of the wilderness instead of hoping for rescue.

The journey is somewhat expected, but the execution is tense and exciting. Filmed in Smithers, British Columbia in real snow, icy winds, and sometimes 37 below Celsius adds to the desolate atmosphere. The drudge through the snow, the threat of predators, the infighting that occurs when machismo goes head to head seem all too real. Although some points like falling in a freezing river and not getting hypothermia seems a reach. One by one the men become wolf fodder (a mixture trained animals, puppets and CGI). Everyone's eventual demise seems inevitable.

Frank Grillo as the combative Diaz stands out. Dermont Mulroney as the family man who is in a situation way over his head, and Dallas Roberts as a voice of reason are the only characters you get to know although it's hard to tell who is who with the heavy coats, beards and hats.

“Once more into the fray. Into the last good fight I’ll ever know. Live and die on this day. Live and die on this day.” This is the mantra that keeps Ottway from giving up throughout the film. It's the mantra that you may want to recite during the movie and you may want to remember to bring a sweater. Also, stay for an extra scene at the end of the credits. However the ambiguity may confuse rather than enlighten.
(Review by reesa)

Email ThisBlogThis!Share to TwitterShare to FacebookShare to Pinterest
Labels: The Grey review