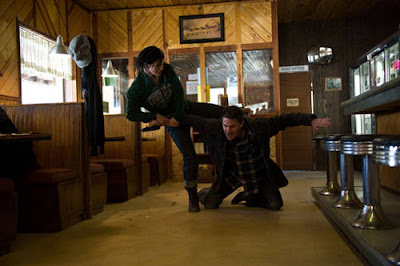 MMA champion fighter Gina Carano should be the next Wonder Woman in case they ever decide to make the movie. Fighting under formidable names such as Crush or Conviction Dallasite Carano is totally believable as a contract black ops agent in Steven Soderbergh's movie Haywire. Written by Lem Dobbs (The Limey) the convoluted plot only serves to show off Carano's impressive fighting skills while surrounded by big name actors that struggle to make the movie more interesting.

Carano plays Mallory Kane who works for independent contractor Kenneth (Ewan McGregor). The movie starts with her meeting with a fellow agent Aaron (Channing Tatum) at a small town cafe. Aaron was working with her at their last job in Barcelona. He wants her to go with him and acts like everything is fine but he can see in her eyes that she's not going. When he throws a cup of hot coffee in her face all hell breaks out. Some of the coffee shop patrons help her out giving her time to grab bystander Scott (Michael Angarano) to use his car to escape. She begins to tell him her story as the incredulous Scott applies first aid to the grazed bullet wound in her arm while she's driving his car evading the police.

Ex-Marine Mallory and Aaron were running an op set up by Kenneth and government guy Coblenz (Michael Douglas) and Rodrigo (Antonio Banderas) a contractor from Spain to rescue a Chinese dissident jounalist in Barcelona. When that was done she was sent to Dublin to work with a British agent Paul (Michael Fassbender) who she is supposed to pretend they are a couple supposedly so he can gather intel at a party. But things go amiss and Mallory realizes that she is being set up to take a fall. To find out who set up the double cross she has to get out of Dublin and back to the states to protect her father John Kane (Bill Paxton) living in New Mexico.

Technical adviser Aaron Cohen who specialized in counter terrorism training for the US military worked with the fight choreographer J.J. Perry a 5th degree black belt designing a form of fighting he nicknamed “gun-jitsu” which is mixed martial arts and muay thai kickboxing. Soderberg emphasizes the the action by not cutting away from the point of impact to get the full effect of her power blows. She runs across rooftops and bounds between building with ease. There isn't any sped up shaky camera action. The action is filmed in real time. At one point Kenneth warns Paul not to underestimate Mallory because she's a woman and she proves that with deadly precision.

The film itself is basically a B movie with an A-List cast. It almost has a 70's Euro feel with the jazz soundtrack and the grainy picture. The dense plot of who is doing what and why is not all that surprising in the end nor is it necessary. All you need to watch is the amazing Gina Carano. It will now be harder to believe these pretty skinny starlets trying to look like they can take care of business after seeing the real thing. Hopefully Gina will usher in a new kind of role model where it's OK to be athletic and healthy and kick*ss.
(Review by reesa)