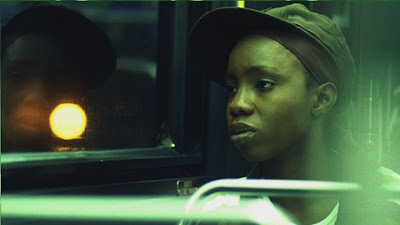 It's hard enough being a teenager, but being a teen of color and a lesbian who is not “out” to her family is an even bigger hurtle to overcome. On the surface, it's probably not the kind of movie that will compel middle American movie goers to rush to the theater. Don't let that fool you. It's a heart felt film about learning the essence of who you are in this world and living to your full potential. There's bound to be some comparisons with Precious in regards to another story of a downtrodden teen coming to grips with emotional adversity, but Pariah stands tall on it's own.

Adepero Oduye gives a remarkable performance as Alike who is struggling to live two lives as the loving daughter of her policeman's father Arthur (Charles Parnell) and her hospital working mom Audrey (Kim Wayans). She leaves for school dressed like a typical teen, but changes before she gets to school to boyish attire like her openly gay best friend Laura (Pernell Walker). Alike is a good student, a gifted writer who gets support and acceptance from her English teacher who wants her to reach a little deeper for her poetry. Laura takes her out to the new night club catering to the lesbian crowd, but Alike, still a virgin, is uncomfortable with this kind of scene. Laura keeps pushing her to hook up with someone, anyone, just to pop her cherry. There's a very funny scene involving experimentation with wearing a strap-on that will probably not sit well with those who are not open minded.

Meanwhile her parents are on edge, their fighting is disturbing to Alike and her sister Shanronda (Sahra Mellesse). Dad is close to his daughter and they play basketball together. But the parents are in denial of their daughter's orientation. Seems like everyone else seems to know but them. They ignore the looks from other people and their side comments. The religious Audrey wants Alike to wear dresses and the pretty new blouse she just bought for her. She believes that Laura is a bad influence. So Audrey sets her up with a colleagues' daughter to walk to school together. At first Alike protests the intrusion, but Bina's (Aasha Davis) similar taste of music opens up a new friendship and a new outlet of experience and heartbreak.

Director/writer Dee Rees expanded her student thesis short film that was accepted to the 2007 Sundance Film Festival. She wrote the script in long hand under the tutelage of director Spike Lee . The project was created on a minuscule budget with a dedicated cast and crew. Rees manages to embody the dialogue with an authenticity and honesty that will relate to most young people searching for their own identities. Pariah is just not about a lesbian young woman in Brooklyn. It transcends beyond a big city subculture to highlight the universal theme of acceptance, self worth, and liberation that no matter what your color or orientation one can't help walking away feeling uplifted.
(Review by reesa)