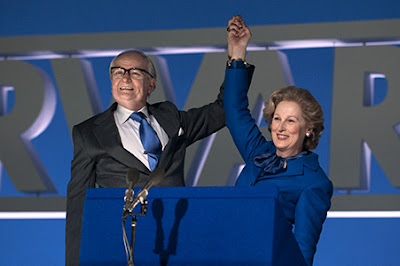 The great Meryl Streep is one of the greatest actresses of our times. Back when she was getting her MFA from Yale School of Drama Times magazine touted her as THE actress to watch. Since then her chameleon type skills has kept her from being stereotyped into the usual ingénue rom-com roles. Her latest effort as the Prime Minister of Great Britain has already got her on the short lists for best actress awards. It's too bad the movie doesn't live up to the promise of her performance.

British theater director Phyllida Lloyd (Mama Mia) and screenwriter Abi Morgan (Shame) concentrates on Margaret Thatcher's later life while telling her story of her rise in politics through flashbacks. Starting out with an older Thatcher who is getting a little forgetful with old age and Alzheimer's. She's watched over by a staff of people who panic when she goes out to the corner store for milk and talking to her dead husband Denis (Jim Broadbent). Nothing like her former self she wields little power but is politely treated by the current heads of state with reserved respect. Her rise of power from the daughter of a store keeper to the conservative leader of Britain is offered up in small snapshots of her younger years played by Alexandra Roach and how she met and married Denis Thatcher (Harry Lloyd as the younger Denis). Denis is impressed by her opinionated stance on politics and becomes her biggest supporter during her years in parliament despite the time it takes away from their growing family. Episodic moments cover her handling of the Falkland Islands war, IRA terrorist bombing and her rise to prime minister, as well as the betrayal of her cabinet that eventually ended her tenure that lasted from 1979 - 1990.

It's unfortunate that these moments were not captured in a coherent story. The movie is all over the place and doesn't really offer any real insight into the actual woman. She may have been ambitious, opinionated whose outlook was influenced by her father. But it barely covers the struggle she must have gone through while working in a male dominated political machine where women were still expected to stay at home. And it gives lip service on how she influenced the world by breaking class and gender barriers except for having to endure the typical stereotypical male harassment. Little time is spent looking at the person as a whole. Even her image consultants only refine the image of Thatcher as a world leader. But how she felt about this, how her politics influenced Britain or how she dealt with the world in general are only sound bytes.

Streep visually captures Thatcher's look and mannerisms with her usual impeccable talent. There isn't one scene where you don't buy her portrayal of Thatcher. In fact your memory may erase the actual visage of Thatcher and replace it with Streep as Cate Blanchett did did with Queen Elizabeth. The movie does manage to carry a certain gravitas to the proceedings, and the costume and art direction look amazing. But Thatcher as a person and her impact on today's politics will have to be left for the History Channel to cover.
(Review by reesa)