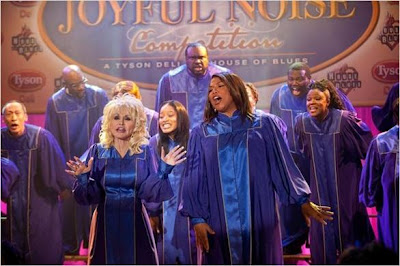 In the small depressed town of Pacashau, Georgia the only thing it has going for it is the Divinity Church Choir who under their beloved choral director manages to win choir competitions. When he suddenly passes his position goes to gospel traditionalist Vi Rose Hill and not the former director's widow G.G. Sparrow. Director/writer of the feel good musical hit Bandslam's Todd Graff fills Joyful Noise with a Sister Act sort of sensibility of trying to update a stale musical style to something hip and modern.

Dolly Parton plays the quirky rich lady in town who rubs Vi Rose (Queen Latifah) the wrong way at every opportunity especially when it comes to the direction in which to take the choir. Pastor Dale (Courtney B. Vance) tells them in no uncertain terms to cooperate or the choir may be disbanded due to budget cuts. They have to win the competitions or the choir is history. Enter G.G.'s grandson Randy (Jeremy Jordon) who ran away from his parents and takes a shine to Vi Rose's 16 year old daughter Olivia (Keke Palmer) who is the star singer. Vi Rose considers Randy a bad boy which of course is the main attraction for Olivia. It also grates that Randy is an excellent vocalist who wants to add some current elements into their music. Especially after their recent competition bombs miserably because it can't stand up to the other flashier choir groups.

The rest of the cast includes the stereotypical crop of racial diversity where everyone gets along. There's the Asian man looking for love with the large woman of color, there's Randy's rival for Olivia with womanizer black teen Manny, then of course there's the bickering between Vi Rose and G.G. Their rivalry culminates into a showdown of wits at the local restaurant where Vi Rose points out the overdose of plastic surgery on G.G. which makes Dolly's visage distracting. Vi Rose also has issues with her kids and their soldier father who rather re-up than come home to the family. Their Asperger son Walter (Dexter Darden) whose musical genius is tapped by Randy's tutelage. Daughter Olivia blames her mom for her dad's absence. G.G. hides her grief for her dead husband. All of this is supposed to add weight to the story, but only makes it bog down. The confrontation between Vi Rose and her husband Marcus (Jesse L. Martin) was the only part that exhibited any real honesty.

Each of the vocalists get their moments to shine through out the film. Parton and Latifah both get their solo numbers with signature country and soul tunes. Look for Kris Kristofferson's duet with Dolly which while earnest is slightly creepy. The competing groups also are on display during the “Joyful Noise” nationals particularly the kids choir who is their main competition. The real highlight to the movie is the music. Upbeat gospel numbers that are allowed full play and not cut off as usual. The exuberance of the musical makes up for the American Idol/Glee presentations which like these shows is easily digestible and quickly forgotten. There's nothing offensive or worrisome so it's good for the whole family if you like this sort of thing.
(Review by reesa)