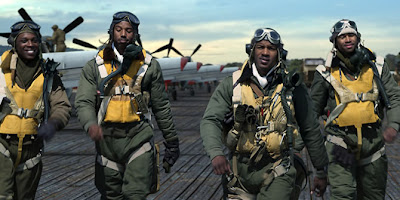 George Lucas' passion project for the past 20 years heralds his recently announced retirement from blockbuster movies to smaller films. Lucasfilms produced this latest feature on the struggle of the Tuskegee airmen directed by Anthony Hemingway from a screenplay by John Ridley and Aaron McGruder. Terrence Howard and Cuba Gooding Jr. had previously played WWII Tuskegee pilots in other projects are back as the men in charge of the unit that is now in Italy running missions that involve ground movements or as one character says “he bombs traffic”.

Racism was still very common and evident in the military when “Negro's” were still considered too incompetent to handle flying. The prevailing attitude was based on a 1925 Army College study that concluded blacks were mentally inferior to white men. The airmen proved their worth with the Tuskegee experiment but despite their excellent flying skills were not allowed to engage in air combat. Col. A.J. Bullard (Terrance Howard) fights against the typical attitudes and roadblocks with intelligence and military fortitude. Not all officers are prejudiced and believe in the 332nd Fighter Group. They are given a mission which they successfully complete so General Luntz (Gerald McRaney) wants them to try a new strategy escorting his bombers.

The story is focused on a small group of fliers “Easy” Martin Julian (Nate Parker) the Captain, his second in command hotshot “Lightning” Joe Little (David Oyelowo), “Ray Gun” Ray Gannon (Tristan Wilds), and “Deke” David Watkins (Marcus T. Paulk). Martin comes from a well to do family and is college educated with daddy issues which causes him to drink and fly. His friend Joe is a risk taker in the air and doesn't follow his Captain's orders so he can add notches to his fighting record. Ray doesn't want to be called Junior anymore as the youngest flier. Deke thanks Black Jesus every time he flies. Despite their skills the soldiers who are all officers are turned away from the officers club until the bomber crews welcome them for their successful protection. Because really it would be bad juju to anger your escorts. There's lots of big speeches about how “we deserve to fight for our country!” angst, lot of praying, white soldiers realizing that their brothers of color are actually good guys, there's Lightning's romance with Sofia (NCIS: Los Angeles' Daniela Ruah) of the picture perfect Italian village.

But the real stars of the movie are the planes. The stock composite characters who play the pilots are shown to be flying P40 War Hawks which at the time were not in the best condition but they were armed with 650 caliber machine guns capable of taking out out trucks and trains. When they are allowed the mission to escort the bombers, Col. Bullard agreed only if they got new planes. The silver shiny P51 Mustangs were then painted with a red nose and tail to make them more distinctive in the air. The aerial footage of the Red Tails fighting the German ME 109's were stunning and exciting. Later they had run-ins with the new German jet fighters who were too confident against the ace flying skills of the Tuskegee airmen. The filmmakers too great pains regarding the accuracy of the aircraft.

Unfortunately the movie was bogged down with stilted and clumsy dialogue. The main German ace pilot kept issuing these trite threats that has one waiting for him to say “I'll get you my pretty and your little dog too” before curling his mustache. The movie plays like a WWII propaganda film or an historic comic book with the stereo typical characters. The writers and director have mostly who worked in television paced the story as if to be ready for commercial breaks. Granted there's a lot information to layout regarding the struggle to create a coherent story. Their story deserves better treatment than this film allows. The Tuskegee airmen have long been an inspiration that will hopefully encourage young people to Google their accomplishments.
(Review by reesa)