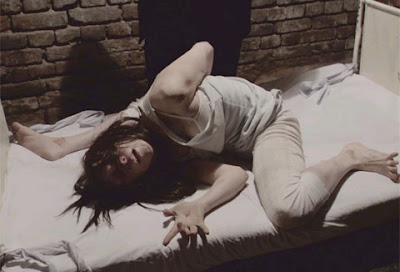 Movies of January 2012 starts the year off with some evil possession genre. One of the trailers advertises the movie being screened in a church while the camera focus is on the audience horrified reactions just like the Parnormal Activity commercials. It also states that the movie is not sanctioned by the Church nor did they aid in the filming. Directed by William Brent Bell who also wrote it with Matthew Peterman, created a supposedly found footage documentary on the case of a woman who allegedly murdered three people during an exorcism.

In 1989 a 911 call is received from Maria Rossi (Suzan Crowley) that three people are dead and she killed them. The police video crime scene which reveals three bloody bodies very graphically. The news reports the incident as a church meeting gone wrong. At her trial Maria is found not guilty by reason of insanity and sentence to a hospital for the criminally insane. She is later transferred by her husband to a hospital in Italy for reasons unknown. Twenty years later her daughter Isabella (Fernanda Andrade) who was 9 years old at the time of the murders tries to find an answer to what happened in case it's something that's inherited. This leads her to Italy where her mother is locked away. She hires Michael (Ionut Grama) a documentarian to film her efforts. Michael must have gone to the Blair Witch School of Photography because his camera work is a bit shaky. They go the Vatican Academy where she visits a class on exorcism. She walks right in with Michael and a camera running and no one notices. Isabella questions some of the students later on the subject. After visiting her mother who has been quiet for the last seven years. Maria doesn't recognize her daughter and then starts speaking in accents before revealing some information that she couldn't possibly know. She then does this banshee scream that freaks Isabella. Showing the recordings to the two young exorcists Ben and David (Simon Quartermain and Evan Helmut) from the class she recruits them to determined if her mother is mentally ill or demonically possessed. David is a doctor and an ordained priest. Ben is the youngest ordained exorcist who used to go with his uncle to exorcisms when he was a boy. The men use unconventional methods combining both science and religion. Since the Vatican changed their policies on this ritual, the "Need Exorcism, Will Travel" team have basically run an off the books service for those in needs. They take Isabella and Michael to witness what they do with a young woman whose body is contorted out of whack from the demon inhabiting her. David keeps an eye on her vitals while Ben does the praying. Isabella's attempts to have to Vatican let the young men try to determine if her mother is possessed or just crazy fails, so she asks her mothers' doctor to let them try. This is when the proverbial stuff hits the fan.

Like the Paranormal Activity movies there's a lot of nothing happening to the very end. People talk, discuss, talk over each other, act nervous, frustrated and if you nap through the 2nd and 3rd acts of the movie you haven't missed much. Suzan Crowley's Maria is the only one that could be possibly scary if she was allowed to do more than swear and laugh manically. The movie tries really hard to be scary and creepy. but mostly it's unintentionally funny. The trailer is more interesting than what happens in the movie. See that, save your money.
(Review by reesa)

Email ThisBlogThis!Share to TwitterShare to FacebookShare to Pinterest
Labels: The Devil Inside review