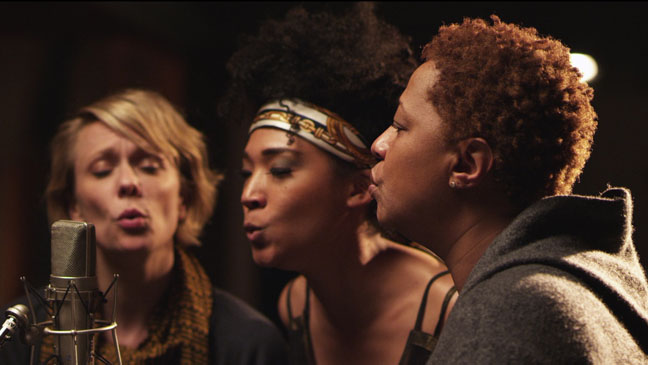 Those ubiquitous singers behind the biggest and the best rock groups adding their harmonies and at times eye candy to the headline acts all got to their place by having great voices on their own. But for those background singers, getting to the the main act is an ambition that is hard to overcome. Documentary filmmaker Morgan Neville of American Masters and Troubadours introduces the world to those nameless vocalists that have punctuated the rhythms of the likes of Bruce Springfield and The Rolling Stones.

The most familiar face right now is Judith Hill who was featured on TV's the voice. She may have not won the big banana, but she was able to perform in front of millions of viewers who will hopefully come see this movie because of her. They will be pleasantly surprised to be introduced to the major players in backup singers: Stevvi Alexander, Pattie Austin, Merry Clayton, Darlene Love, Lisa Fischer, Táta Vega and Joe Lawry. Darlene Love was the only one that made it to center stage with some success, but most of us never knew their names outside of Merry Clayton who is recognizable for her powerful duet performance with Mick Jagger on Gimme Shelter. It takes a certain X-Factor to step in front and center and carry the stage on their own. Backup singers by nature, must conform to the various artists they are hired to work with at any given time. Their voices must blend and not upstage, yet be proficient to add the right groove and syncopation.

Besides sound bytes from Bruce and Mick there are snippets of interviews with Lou Adler, Chris Botti, David Bowie, Sheryl Crow and others. The stories behind some of their songs and the appreciation these artist have for their backup singers is worth mentioning. The sound track is filled with the audio of their most famous selections that will stir the memories. And there are live performances that will make you weep and/or give your goosebumps from the sheer talent without auto-tune.

The film points out that the back up singers are becoming a thing of the past. The style of music that requires a chorus of voices to punctuate a phrase, add emphasis to an emotion, and add some motion to the stage with their synchronized moves will a vintage memory to be relived on YouTube. It's sad state of affairs, because after all what would Gladys Knight be without her Pips. It's great to see that these artists are finally getting the attention they deserve.
(Review by reesa)

Email ThisBlogThis!Share to TwitterShare to FacebookShare to Pinterest
Labels: 20 Feet From Stardom review