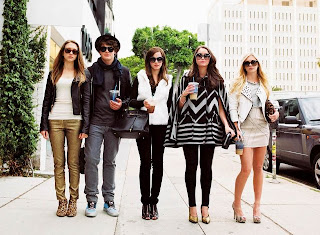 Director Sofia Coppola's previous work like The Virgin Diaries, Somewhere, Lost in Translation and Marie Antoinette are inhabited by characters that have a disconnect to the world around them. Her latest entry opened the Un Certain Regard section of the 2013 Cannes Film Festival is based on the 2010 Vanity Fair feature, The Suspects Wore Louboutins by Nancy Joe Sales. The "Burglar Bunch" did a rash of robberies of celebrity homes in 2008-2009. In typical Hollyweird style, the real life perps don't look anything like the pretty actors that are portraying their deeds.

Marc (Israel Broussard) is the new misfit kid at high school having been kicked out for being absent too often from his last location. He's befriended by Katie Chang (Rachel Lee) who invites him to hang with her besties: Nicki (Emma Watson), Sam (Taissa Farmiga), and Chloe (Claire Julien). The are all pretty, shallow young things who go to clubs that celebs frequent. Marc is awestruck and impressed. The young women just accept him as one of their own as he offers style advise. On the way home from a party, Katie shocks Marc by stealing items from open cars then using the wads of cash to fuel their drinking and drugging. One day she tells him she just walked into someone's house who was not home. It gives her the idea to hit Paris Hilton's house when she learns that the Paris is out of the country. Marc being smitten with Katie's attention goes with her. The cycle of robberies begin when the other girls hear about what they did.

They check the gossip columns to find who is going to be out of town, Google their addresses, then walk in through open windows, or use keys under doormats. The kids treat the treasures found at the homes like going shopping, filling designer bags with shoes, jewelry, and wads of cash secreted in cases under the bed or closets. The teens then post themselves dressed in the stolen goodies on Facebook and word spreads among their peers. They also sell the illegal stuff like street vendors. The kids are unaware that some of their escapades are caught on CCTV so it's no surprise that they get caught.

The Bling Ring is monotonous. The kids steal, they buy drugs, they party at clubs, they dress in their ill gotten gain. They are devoid of emotional depth, sympathy or self-awareness. It's hard for the audience to relate to these spoiled white kids, with too much money, time, and lack of purpose to their lives than instant gratification. Supposedly there's some lesson to be learned from the crass consumerism in our lives, but watching these pretty young things being stupid and useless seems like a waste of time. Like the kids, it's pretty to look at but there's nothing there there. It's nice to know they were given prison sentences, although one used it to promote themselves. One thing that does work in the movie, is it has a great soundtrack.
(Review by reesa)

Email ThisBlogThis!Share to TwitterShare to FacebookShare to Pinterest
Labels: The Bling Ring review