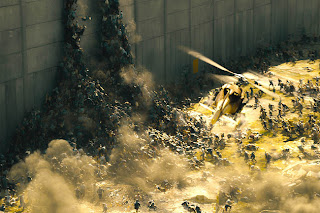 Max Brooks' novel World War Z was a series of different stories told to a UN investigator about the events that occurred when a devastating virus turns the world population into zombies. The story and screenplay was handled by J.Michael Straczynski, Matthew Michael Cranahan, Drew Goddard and Damon Lindelof who changed the focus of the story to the investigator to be played by Brad Pitt who also worked as a producer on the project. Marc Forester (Quantum of Solace and Finding Neverland) was brought in to direct this heavy FX laden film. The beginning and ending of the movie had gone through many rewrites and reshoots while the sky rocketing budget for the movie was getting more publicity than the movie.

Pitt plays Gerry Lane, a recently retired UN investigator who wants to spend more time with his wife, Karin (Mirelle Enos) and their two daughters Rachel (Abigail Hargove) and Connie (Sterling Jerins). Pitts image as a famous dad makes one think that he's just that kind of father to his real life kids. He's kind, sensitive and firm with girls. Especially when one girl has an asthma and he gently gets her to control her breathing. The movie starts with the crowed streets of Philadelphia when panic erupts and there's total mayhem ensuing as the “infected” start chasing everyone down. No one is safe. Gerry manages to get them out of town when he gets a call that his help is needed. It gets them evacuated to a ship 200 miles off the coast of New York so he agrees only if the powers that be will keep his family safe. Gerry's mission is to find Patient Zero. He was to get their leading scientist to South Korea where there's been message regarding the outbreak. Gerry ends up going around the globe trying to track down the information that will lead to an antidote to the virus. These zombies are not your usual slow moving walking dead. They are fast, strong, and resemble ants climbing on top of each other. The poster and trailer are indicative of what to expect. They are everywhere and it takes only 12 seconds for your body to become one of the undead.

Pitt being the ideal leading man, seems to be only one who is thinking clearly in the whole movie. Swarms of zombies attacking, and people are making sure he gets out alive. And through his various adventures he manages to singlehandedly think of a solution to the whole thing. Aside from that, the pacing and excitement is non stop. There's the tenseness and edge of your seat moments, it's like the first Alien movie where in space no one can hear you scream. There's some genuine jump and yell moments that are not dumbed down and make sense in the movie. Even the quiet scenes to help you get to know the characters and well paced and gives Gerry a center and emotional heart for the story. There will be some criticisms for film, but despite that, this is an “E” ticket ride for the summer.
(Review by reesa)