The Kings of Summer 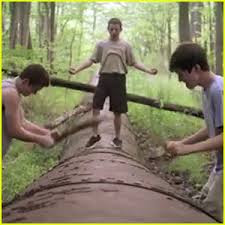 There is always the ultimate summertime coming of age story, and it looks like the Kings of Summer will rule. The dramedy by Jordan Vogt-Roberts in his directorial debut was written by Chris Gilletta and premiered at the 2013 Sundance Film Festival. It was also selected by the Dallas International Film Festival this year. The film captures that particular magical moment in adolescent innocence, when the world if filled with possibilities, and you believe you can conquer all.

The newcomer cast of boys includes Nick Robinson as high school freshman Joe Toy. His widowed father, Frank (Nick Offerman) has a hard time communicating after the death of wife and mother of Joe. Joe's best friend Patrick (Gabriel Basso) is the only child of Mr. & Mrs. Keenan (Marc Evan Jackson and Megan Mullally) who drive hims so crazy that's he's developed hives. Both young men are frustrated by their parents attempts to control their lives. The parents, although well meaning, have lost sight of the swamp that all young teens have to navigate on the way to adulthood. Joe sells Patrick on the idea of building their own house in the woods and living independently. They are joined by a strange kid named Biaggio (Moises Arias who steals all his scenes). He helps them in their mission to become masters of their own destinies. They clear this hidden spot then using found materials, they erect a shelter of sorts, and they even decide to grow beards. Their adventure becomes marred when Joe invites his love interest to his secret hideout and life becomes more complicated.

Maybe it's because the three boys are new to the screen, their performances seem raw and emotionally reckless which is interesting to watch. The name actors have an improvised feel to their performances which are funny and grounded in almost a TV sit com feel, only more amusing. Offerman is particularly understated as the father who sees his son and daughter drift away from him. The emotional heart of this film is journey that both son and father take in growing up and accepting responsibility. There was the other coming of age story, Mud with Matthew McConaughey, which was great but it took itself more seriously. The Kings of Summer is more wistful, quirky and refreshing.
(Review by reesa)

Email ThisBlogThis!Share to TwitterShare to FacebookShare to Pinterest
Labels: The Kings of Summer review