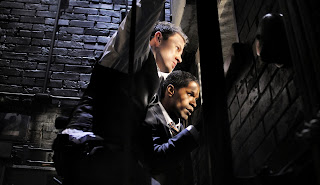 Oh look, Django is the the President! It's just the first thought that comes to mind when Jamie Foxx as the President is riding around the Lincoln Monument spouting Lincoln trivia to his staff. Director Roland Emmerich (Independence Day, The Day After Tomorrow and other disaster epics) with writer James Vanderbilt (The Amazing Spiderman) destroy the White House while Channing Tatum saves the day. Yes, there was another similar situation with Gerard Butler single handedly doing the exact same thing. It makes one wonder just how vulnerable our Capitol is from terrorists and over imaginative filmmakers.

Tatum is Cale, a Capitol policeman charged with protecting the Speaker of the House Eli Raphelson. His daughter Emily (Joey King) is a White House groupie. She knows everything about the house, and the events that concern the President. He is her hero having lost confidence in her dad who spent most of her life in the service. As a way of making up to missing her Flag Day performance he gets her a White House pass when he goes to apply for a job in the Secret Service. Carol Finnerty (Maggie Gyllenhaal) and her boss Walker (James Woods) interviews him and finds his resume doesn't stand up to their standards. While getting ready to leave, there's an explosion. All doors are sealed and Cale's Emily is stuck in the bathroom downstairs. She witnesses the bad guys and is savvy enough to take pictures. After all she has a You Tube channel. Cale goes in search of her while all heck is taking place.

This is the kind of movie that you just suspend your disbelief that the entire Secret Service staff at the White House can be completely annihilated by guys disguised as sound technicians. That one loner cop who was disqualified from the being a Secret Service agent can manage to team up with the President and search for his daughter at the same time. It's a buddy movie. They have lots of tight situations to endure. They have sincere and funny dialogue. The unbelievable bad guys (Jason Clarke and Jimmi Simpson) are so evil, clever and always seem to have the upper hand. The powers that be monitoring the action are quick to dismiss Cale's intel that there are missile launchers. Lots of people are killed. Lots of stuff blow up and there's a really nifty chase scene on the White House lawn. Helicopters crash into the building. The action is nonstop although it took about a ½ hour before it starts to set up the characters. Despite all the action and mayhem, the one that steals the show is Donnie the White House Tour Guide (Nicolas Wright).

Don't go thinking this is art, because it's not. It's a popcorn movie guaranteed to entertain for a couple of hours and you leave saying “that was fun” and forget all about it.
(Review by reesa)

Posted by Dallas Movie Screenings at 1:52 AM

Email ThisBlogThis!Share to TwitterShare to FacebookShare to Pinterest
Labels: White House Down review