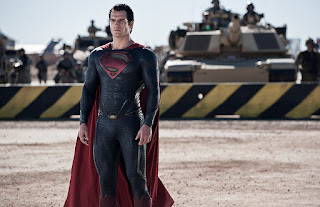 To answer everyone's question on whether or not Zach Snyder successfully is revamping the Superman franchise with Man of Steel, yes they were; Snyder, Goyer, and Nolan's efforts to distance themselves from Bryan Singer’s 2006 “Superman Returns,” Snyder starts the movie in Krypton, the giant glass covered city is replaced with a grand palace looking more like an alien city rather than the Dallas Cowboys stadium covered in ice and glass. Born on the alien planet of Krypton, Kal-El is sent by his parents to live on planet Earth, where he is given the name Clark by kindly farmer Jonathan Kent (Kevin Costner) and his wife, Martha (Diane Lane), who raise him as if he were their own son. As a young boy, Clark displays incredible superpowers that instill him with a profound sense of personal responsibility. But when his new world is attacked by a force that humans are powerless to defend themselves against, Clark assumes the identity of Superman and fights to protect the entire human race. Academy Award-nominated actor Michael Shannon (Revolutionary Road, Boardwalk Empire) co-stars as General Zod and Laurence Fishburne steps into the role of "Daily Planet" editor-in-chief Perry White. Russell Crowe as Superman's Krypton father and Christopher Meloni as Colonel Hardy fill out the well balanced cast.

I personally love this movie, it was a mash up between Superman 1 and 2, but I believe Snyder’s version was much deeper and actually showed his human side and how much he was ostracized by his peers growing up. Kevin Costner did an amazing job as Jonathan Kent; this version showed how Costner’s character really helped shape Superman’s character as the superhero that he is today. All throughout the movie it shows how he follows his fathers' teaching and how he bases his action. My favorite scene in this movie has to be the fight scene, Zod is trying to defeat superman even though it showed that superman was trying to protect his people from him as well but he was trying to make sure he wasn’t the only Kryptonian left in the universe. Clark Kent or Superman has to make several important decisions while dealing with General Zod. The film has a phenomenal ending that movie goers will enjoy. They have already given the green light on the sequel and I believe it is going to be a great one similar to this one. This movie is a must see for the summer and I believe it will be the number one blockbuster this season.
(Review by Junayed Sarwar)