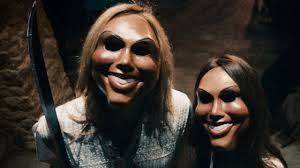 As I sit down to write this review, it’s hard for me to gather the words to explain exactly how I feel about The Purge. Did I like it? Meh. Did I hate it? Meh. This movie put me in a very neutral zone with it; which isn’t necessarily a bad thing or a good thing. Yes, there were some cool action sequences and an interesting twist (even though you’d have to be, let’s just say, not the sharpest tool in the shed to see it coming). But also, I think that the idiotic moves made by every single character and awful characters as a whole outweighs those few moments in this film that made it worth watching. I already know that I’m on the fence about this movie. But I have a feeling that as I write this review, I’ll start leaning to one side or another by the end of it.

Let’s start with the good parts of this movie. There is a pretty cool premise surrounding the entire thing. For those that don’t know, The Purge is centered on an annual event that occurs. Once a year, for 12 hours, all emergency services shut down and every crime becomes legal, even murder. This idea helps to “weed out” the “jobless and useless citizens” of America. Whether I believe that this is a good idea or not, I’m not going to say as that would begin a whole, unnecessary political debate. Let’s just say, I believe everyone has rights. There. That’s the end of that. Back to the topic… I thought that the idea this movie was based on was great. It’s not everyday that a new thriller comes out with an original idea. Also, there were some pretty cool fight scenes. But that’s about it for the good of this film…onto the bad.

Pretty much the entire movie only happens because of some bone-headed kid’s moves. On paper, it’s supposed to look good and like the kid is just caring. But once it’s put onto the screen, it SUCKS. Nothing has made me more mad and irritated in a movie than this. I also don’t believe I’ve hated a character more than this certain kid, played by Max Burkholder. By the end of the movie I was really hoping they’d just kill him so as to rid us of his whiny butt. Seriously, he was not a very likeable character at all. In fact, all of the characters portrayed in this film were unlikable and hard to connect to. They were all poorly written and the actors/actresses depicting them did horrid jobs of it. The actors were so fake in their acting that nothing surprised me when the supposed “twist” happened at the end of the film. I had called it thirty minutes before it was going to happen just because of how readable and dumb the characters were in the beginning of the movie. There were several other bad sides to this movie, but I think I’ve ranted enough.

So to complete my review of The Purge, it sucked. Not even the cool, ass-kicking scene with Ethan Hawke and three bad guys could save this movie from being horrible. I’ve made up my mind: don’t see it. Believe me, I tried so hard to like this movie because I wanted it to be really good. But I just couldn’t appreciate it in the slightest. I left the theatre even saying it was pretty good. However, while I thought about it on my drive home and the next day, I realized that it just wasn’t that great. And as I’m writing this review I’m realizing that it just flat out sucked. So, definitely don’t waste your money on this one. You could maybe Redbox it if you’ve got a fever and there really is NOTHING else to watch. But in my personal opinion, The Purge is definitely not something I would waste my time watching.
(Review by Weston Baker)