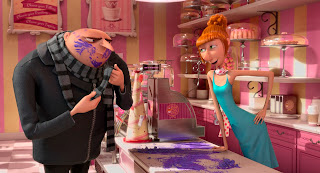 Kid/family movies walk a fine line when it comes to whom exactly it attracts. If the humor is too stupid or slapstick, the kids will generally be the only ones entertained by the movie. If the humor is too “old”, the parents are going to understand but it will leave the children bored and rowdy. When Despicable Me was released back in 2010 it was a huge hit for the whole family, because it walked that line perfectly. By attracting audiences both young and old, the film was able to attain a great mass of viewers and happy spectators.

It wouldn’t be a huge stretch to say that the biggest draw to the film was the Minions, the adorable, yellow creatures that Gru (the film’s protagonist) had working for him. It was because of the huge success of the Minions that I was pretty leery for Despicable Me 2. I feared that the makers of the movie would try TOO hard at bringing in the Minions more, and thusly ruining what made the first Despicable Me so loveable. But within the first 15 minutes of the movie, all of my fears had vanished. My friend and I were laughing so hard at every little thing that occurred, (most of it having little to do with the Minions), that we knew we were in for a treat.

This movie had all of the same elements as the first one: cuteness, family-friendliness and most importantly hilarity. Now, keep in mind that my friend and I are both college-aged people. So, for our laughter to be just as loud as the 100+ kids in attendance at the screening must say a lot. From a filmmaker’s standpoint, it wasn’t too bad of a movie. It became a tad bit predictable as well as slow towards the middle of the film, the amusement of the movie had worn off by this time and it seemed as if it was just going through the motions of every other movie. However, that only lasted for about 20 minutes before the familiarity of Despicable Me returned and sparked the theatre back up with laughter.

As the movie ended and I walked out, I stood outside for a little while and overheard several families exiting the theatre with a laugh and thrill in their voices. Everybody seemed to enjoy it, and there’s no reason why it shouldn’t have been. This movie was cute, hilarious, did not disappoint and despite dragging for a little bit and becoming dull, it ended on a high note. Despicable Me 2 is definitely a must see for the ENTIRE family and should not be passed up this summer.
(Review by Weston Baker)