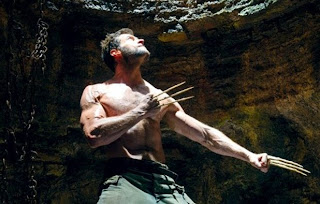 Hugh Jackman is THE man. A perfect human specimen of machismo manifested as the immortal mutant, Wolverine. The indestructible Marvel comic character would not be as interesting if he wasn't suffering some emotional dilemma like outliving everyone he cares about, especially his beloved Jean Grey who he killed in X-Men: The Last Stand. Director James Mangold and writers Mark Bomback and Scott Frank start the story shortly after the events in that last movie. Living as a recluse in the Yukon, Logan harbours a death wish as he's being haunted by his dreams. It's a story of redemption and repentance and you don't know what you got til it's gone.

Yukio (Rila Fukushima), a young quirky red headed Japanese woman helps out Logan before he can do too much damage to some hunters who had killed a grizzly. Yukio has been searching for him for her employer Yashida (Hal Yamanouchi), the rich and powerful owner of Yashida Industries. Her boss is dying and charged her with bringing Logan to Japan to thank him. During WWII, Logan as a prisoner in Nagasaki, saved Yashida the day the atomic bomb fell. He witnessed Logan's amazing regenerative powers. Yashida offers to give Logan what he wants more than anything else...to become mortal. To live a normal live, grown old and die. Part of Logan is tempted, but suspects something is seriously wrong. His interest is peaked by Mariko (Tao Okamoto), Yashida's granddaughter and heir to his fortune. It seems her father and fiancé have some other plans. Mariko's life is in danger and Logan can't help himself but to protect her.

An attempt to kidnap Mariko and they go on the run. There's some fast paced battles involving samurai, ninjas, and Yakuza with swords, arrows and everything else. The filmmakers took every genre of Japanese action movies and dumped it together. It's hard to tell who's is fighting who. In Wolverine mode the clawed Logan battles his way to Mariko's capturers. The guys with the arrows seem to be helping them out or are they? They are being led by Harada (Will Yun Lee) a childhood friend of Mariko. There's a great battle on top of the bullet train as it speeds through the city. When they finally reach safety he notices something wrong. His injuries are not healing.

Obviously there's going to be a little something something going on with the lovely Mariko and the guilt tripped Logan. She brings out the humanity and innocence for him so that the epic battle at the end will a have more bittersweet meaning. Svetlana Khodchenkova as the tall blond Viper gets to wear some interesting skintight outfits with her slithering tongue, and poisonous breath and almost seems out of place as the only other mutant in the film except for that Silver Samurai, a giant robotic Samurai made of the indestructible metal adamantium.

While the movie seemed to lack the usual wall the wall action of the previous films, it did offer a different look for Wolverine and his angst. Plus more that one can wish for of Hugh Jackman's sculpted physique. Please wait for that extra scene during the credits for a tease that was probably the best part of the whole film.
(Review by reesa)

Email ThisBlogThis!Share to TwitterShare to FacebookShare to Pinterest
Labels: The Wolverine review