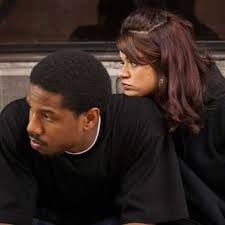 Fruitvale Station is based on real events and I thought the filmmakers handled it well. The movie follows Oscar Grant who was murdered at a train station on the last day of 2008. The movie takes place the day before and we get to see Oscar's family, daughter and friends and we get to feel for him but here is the problem. The movie really sells this based on real life scenario and it's made by the Weinstein Company and you know they will be campaigning this for the Oscar's. It just felt like it was forced. The acting was good. You really see this movie for Michael B. Jordan who plays Oscar. He was in the movie Chronicle and he was god in that and this is the movie that tests him as an actor. Did he pull it off? Yes, he did. The cinematography felt gritty and realistic and served as a key componant to the atmosphere of the movie. It's a really short movie but it keeps your attention to where it flies by. I give Michael B. Jordan props for showing his acting chops and can't wait to see what he does next but this movie just felt a little empty for me. But it's still a good movie. 8/10
(Review by Chase Lee)