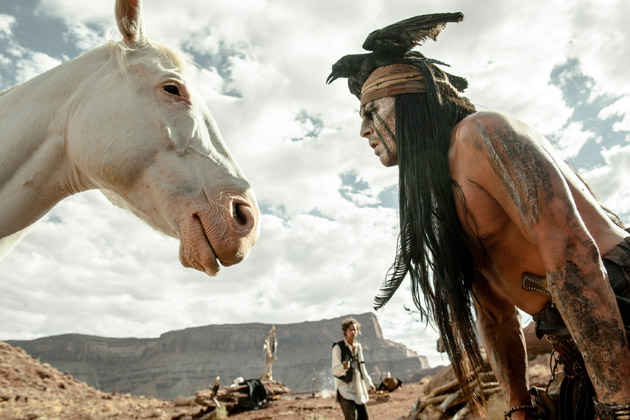 The masked warrior of the old west has been around since 1933 when it was a radio show in Detroit. The characters spawned comic books, movies and a television series. The catch phrases still endure today with “Hiyo Silver! Away!” and Tonto's name for the Lone Ranger as Ke-mo sah-bee. The basic story of how the two meet is sort of intact with a manic revision by writers Justin Haythe, Ted Elliott and Terry Rossio under the direction of Gore Verbinski. Since he also directed Johnny Depp in The Pirates of the Caribbean franchise, it's hard not to notice the similarities of Tonto and Jack Sparrow with the affectations and costume accessories. The movie should have been called Tonto and his trusty sidekick the Lone Ranger.

Armie Hammer is John Reid, the straight laced prosecutor is returning home by train to Colby, TX. The railroad has come to town in the form of progress. Tom Wilkinson plays the railroad representative Cole, who promises to hang Butch Cavendish (William Fichtner) who is also on board in chains and guarded. Next to him is an eccentric Comanche with a raven on his head (Depp). The opening action piece involves Cavendish escaping and Reid trying to stop him. Reid's brother Dan is the Texas Ranger in town. He's married to Rebecca (Ruth Wilson) but with John they seem to have lingering feelings towards each other. Dan and the Rangers take off to chase Cavendish unfortunately like the original story, they are ambushed and all are lost. That is except John who is saved by Tonto because the Spirit Horse Silver selects John as his harbinger of justice.

It's after this, the movie seems to start veering off into some tangents. The unique and odd Tonto which is introduced at the beginning of the movie as a mannequin in a wild west show in 1933...yeah, hard to explain, is relaying the story of the lone ranger to a young kid. The story is told from his perspective and even to the young boy it seems somewhat suspect. John Reid keeps trying to keep his sense of justice and honor in the law to the point where he refuses to man a gun. Tonto guides John on the ways of the Comanche despite the foolishness he feels of the horse's choice. There is so much going on trying to set up the story be giving Tonto some back story, the railroad abolishing the treaties to take the train through Indian lands, the Calvary soldiers, and Cavendish who Tonto thinks is some sort of possessed creature that must be killed with a silver bullet.

The performances are good. Depp is always brilliant even when playing a riff of the same kind of character. The big pay off is the Lone Ranger theme song or AKA the William Tell Overture when the masked man finally grows some balls and accepts his fate. The long running time of the film is all really to set up for the best train chase ever. The exciting moments are big and noisy and way over the top. Just what you would expect. But don't be faked out by that extra scene during the credits. Or maybe go ahead. When you think about it, it's hilarious.
(Review by reesa)

Email ThisBlogThis!Share to TwitterShare to FacebookShare to Pinterest
Labels: The Lone Ranger review