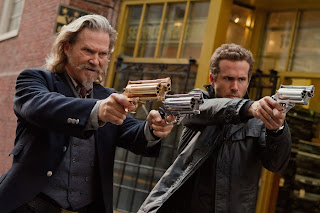 This is a movie that isn't bad but isn't very good. I felt neutral. That is something you don't want to feel. The directing is ok and I will give him points for trying to create this insane world of what was a comic book series. There was a lot of action which made up for the very bland script. The writing was cliche'd and didn't provide much but some very unfunny lines and forced humor. The actors could only do what was given to them and they tried and made it work. I love Ryan Reynolds and Jeff Bridges to death but this was not a good movie choice for them. I mean come on they are Van Wilder and the Dude...that would have been a funnier concept. The cinematography is ok and seems a bit wild and sporadic sometimes but in some scenes it worked. The movie is only an hour and half long but it felt like two hours. The special effects were actually good in some scenes and in some cases looked realistic. Those are the only points I will give it. It's just an average movie. There is nothing spectacular in this summer movie. It should have been released in January. 4/10
(Review by Chase Lee)