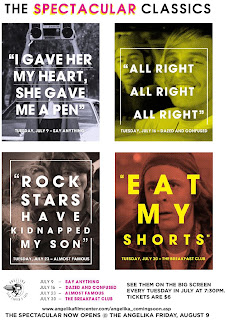 THE SPECTACULAR CLASSICS SCREENING SERIES:
Taking place in 9 national markets, the series will present an iconic coming-of-age film each week during the month of July for the four weeks leading up to theatrical release of THE SPECTACULAR NOW. An exclusive video introduction will precede each screening by screenwriters Michael Weber and Scott Neustadter. Audience members will receive a ticket to an advance word of mouth screening of THE SPECTACULAR NOW in their market.

The films to be featured are: