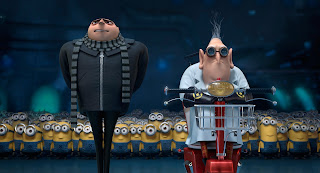 The directing team of Despicable Me Pierre Coffin and Chris Renaud are back with the same writers Cinco Paul and Ken Daurio to continue the adventures of the former super villain Gru and his minions. What made Despicable Me into one of the biggest animated movies ever seems to have lost it's steam. Seems suburban dad life with his 3 adopted daughters can find Gru still cranky, rude, and cantankerous but in a more lovable way just less despicable.

Gru (voiced by Steve Carell) is throwing a princess party for his youngest charge Agnes (Elsie Kate Fisher). While Gru dressed as a fairy princess as to not disappoint her, a mysterious villain has stolen a secret lab where a monster making serum was being developed. Gru, Dr. Nefario (Russell Brand) and the minions have been living the straight life in the jam making business. Dr. Nefario decides to quit because he got an offer he can't refuse to go back to his evil ways, besides his jams are pretty foul tasting. The head of the Anti-Villain League Silas Ramsbottom (Steve Coogan) decides to recruit Gru's for his knowledge of the underworld and sends him agent Lucy Wilde (Kristen Wiig) to assist while they search to discover the missing serum. Gru's daughter's are happy with the young, peppy new friend in their dad's life because they have been attempting to sign him up for some Internet dating sites. There's also an expected romance to form between Lucy and Gru. The story does do a flashback as to why Gru is love challenged and went down the wrong path.

AVL has tracked down some clues that suggests the perps are operating in the shopping mall. Lucy and Gru must work undercover in a cupcake shop as they investigate possible suspects like Mexican restaurant owner Eduardo (Benjamin Bratt). Gru believes he may be El Macho, a masked daredevil villain who had died while riding a shark into a volcano. To involve the daughters into the plot, Eduardo's son flirts with the oldest daughter, Margo (Miranda Cosgrove).

There must have been some intense feedback from the fans of the first movie to involve more of the minions. Indeed there are plenty on the life of the little yellow guys as baby sitters, jam makers, housekeepers, and gofer for Gru. They are fun little things that do their masters' bidding, but they still manage to break out and party at a moments notice. The story involves some craziness happening to the yellow ones turning purple and hungry, that hopefully won't frighten the really little tykes.

This is a nice family movie that will have some amusement for the parents and will delight the kids. If you liked the first, you may enjoy this time around. Maybe not as much, it's still fun. The short bit as the credit rolls is probably the best part of the whole thing so stick around.
(Review by reesa)

Posted by Dallas Movie Screenings at 12:11 AM

Email ThisBlogThis!Share to TwitterShare to FacebookShare to Pinterest
Labels: Despicable Me 2 review