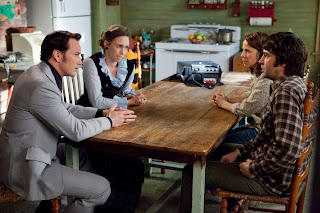 There hasn't been a truly satisfying scary movie since Insidious which was also directed by James Wan, who is also known for his torture porn Saw series. Based on the real life paranormal investigators Ed and Lorraine Warren, the movie was in development for about 20 years. The original treatment was written by producer Tony Derosa-Grund, then the brothers Chad and Carely Hayes (Whitehouse) changed the point of view from the from beleaguered family to the Warren's. The demonic possession genre was popularized with the Exorcist, but lately re-runs of the film seem almost cheesy by today's standards. The Conjuring is for all those too young to remember being seriously freaked when seeing that little girl in that movie hurled pea soup, raised beds, and turned her head 360 around her neck.

The story begins in the early 70's with the Warren's giving a lecture on the Annabelle doll that was being used by a demon to find a human host to inhabit. Lorraine (Vera Farmiga) is a clairvoyant and Ed (Partick Wilson) is the only non Catholic demonologist who assists with exorcisms sanctioned by the Church. They keep a locked room in their suburban home all the artifacts collected from their investigations. Including the creepy Annabelle doll which sits in a glass case with a big sign not to open. The Warrens are begged by Carolyn Perron (Lili Taylor) to please check out their house. She and her husband Roger (Ron Livingston) had just moved into this old farmhouse in the country. The family that includes their 5 daughters have been experiencing some unusual activity like doors opening and closing mysteriously, Carolyn waking with bruises on her body, the youngest daughter talking to a boy she can see in an old music box, someone pulling on their feet and telling one of the girls that they are all going to die. Strange stuff like that.

Farmiga and Wilson spent some time with the Warrens getting to inhabit some of their personal auras, so to speak. As Lorraine, Farmiga is a source of calm and understanding. She is not afraid of the phenomena like the lights exploding, or a ball suddenly bouncing off a shelf. The Warrens endeavor to contact the spirits by filling the house with motion capture cameras like those SciFi Channel ghost chasers only not in digital. Their crew includes Drew (Shannon Kook) who is the tech, and Brad (John Brotherton) a cop who is reminded that one can't shoot a ghost. The family who have been camping out in the living room are reassured by the Warrens. But of course, that's when things start getting more interesting.

Allegedly this is supposed to be a true story, but at times it's hard to believe some of the scenes if that is the case. But it has plenty of old school jump in your seat hair raising moments. There are times when you want to say, “turn on the dang lights!” but then it wouldn't be that spooky, eh? The music is a nice mood elevator setting up the chill factor hitting at the right levels like with that old piano tuning a random note on it's own. Overall, it's way better than those Paranormal Activity series. If you believe in ghosts, then you will love this.
(Review by reesa)

Email ThisBlogThis!Share to TwitterShare to FacebookShare to Pinterest
Labels: The Conjuring review