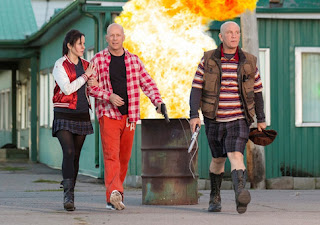 Red 2 is directed by Dean Parisot (Home Fries and Galaxy Quest). It starts off with Frank Moses (Bruce Willis) having as much fun as you can have in a warehouse store when his old partner Marvin (John Malkovich) finds him and wants him to team back up with his ex-CIA buddies and help save the world from a nuclear device. Frank insists he is out of the business of being in the CIA and is over protecting his girlfriend Sarah (Mary-Louise Parker) who really wants him to go back to work. While coming out of the warehouse store they see a car exploded. Next thing you know they are at Marvin’s funeral and Frank has a hard time thinking his long time friend has passed. When Frank realizes that Marvin isn’t dead and with Sarah’s pleading he finally gives in and goes back to work. Sarah even likes the fact Marvin always lets her in on everything and even gives her a gun, which she doesn’t know how to shot or let alone where the safety is at. You learn very quickly the title really fits this movie well Retired, Extremely, Dangerous!

They go globe trotting from Moscow to Paris and even to London all while Frank realizes that a bounty has been put on his head. Frank teams up with an ex love interest who is Katja (Catherine Zeta-Jones) and his old buddy Victoria (Helen Mirren) Sarah isn’t very happy about Frank and Katja reunion but she gets him back when they try to torture some info out of The Frog (David Thewlis) and Sarah is the only one who can get the info from him by almost kissing him herself. Then she gets caught kissing while she is guarding a door to a computer room in the Kremlin. One of the assassins, Han Cho Bai (Lee Byung-hun) isn’t a big fan of Frank’s since Frank stole his plane and keeps trying to get his plane back. After a huge fight Frank realizes he needs Han’s help in all this.

Victoria and Frank go find Bailey (Sir Anthony Hopkins) who has created this nuclear device but to find him in a loony bin. Only to find out that he has locked them in, but don’t worry they soon get out and back on the road they go! The gang finds themselves at the Kremlin and that is where they finally find the nuclear device only to have it stolen from them by the crazy Bailey whom they find out really wants to set the bomb off! You will have to go watch the movie to find out if he will set it off!

Sure this movie has some over the top stunts but isn’t that what you want from a summer movie? It also gave me a few good laughs. Sure I didn’t see the first film but I really enjoyed this film and say see it at least as a matinee.
(Review by Daina Moseley)