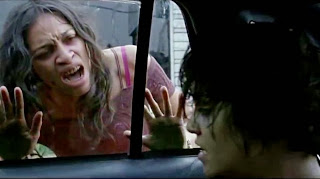 This movie, based on inspiring true events is written and directed by Rodney Krauss. Mr. Krauss presents a young adolescent Agnes Bailey (as played by Vanessa Hudgens) who uses determination and hope as she break away from her drug-abuse mother, Jane Bailey (as played by Rosario Dawson) in search for a better life. Her hope lies in the form of an old letter, as she searches for a way out of a bad environment into a place where she can be accepted. After countless failures she soon finds that hope in the form of a priest and among the least expected source a homeless shelter for unwed mothers.

First there is Agnes, who prefers to call herself Apple, the adolescent who is not sure of herself or her sense of belonging…leaves her drug abusive mother to run away towards a unknown father, Tom Fitzpatrick (Played by Brendan Fraser) whom she’d never met before. Using the one and only letter written before she was born, as a way to reach him, she only finds herself in another situation where a sense of belonging becomes a way of controlling and a feel of loneliness becomes her way of life. Her father’s wife Joanna (as played by Stephanie Szostak) makes the situation worse by acknowledging her dislike when Apple is accepted in to their home. Soon Apple discovers she is pregnant and is forced to consider the only alternate by her father and stepmother wants, to terminate the pregnancy. Realizing the alternative is more than she is ready accept she runs away toward the cold and lonely streets of Newark. Not a place for a young girl like Apple, she struggles to outsmart one situation after another but soon lands herself into the hospital after a she had a car accident—She awakes in the hospital bed to find a older man, Priest McCarthy (Played by James Earl Jones) in her room. He soon become like a surrogate father offering her a chance of happiness and contentment. He offers her a place of refuge where she later finds and feels the warmth and love from the most unlikely source--through a group of strangers that welcomes her as their family. The lovely Ms. Kathy DiFiore (Played by Ann Dowd) is the picture of the perfect foster parent to a home of pregnant young girls and young mothers. She is shown as a strong leader but is as gentle as a lamb when it comes to protecting the young women. She is shown to demonstrate strength, patient with lots of control when dealing with Apple’s restless mother who would stop to no end to claim control over her daughter’s life again.

Apple’s character seemed to be brave and tough on the surface is very vulnerable as a typical adolescent just looking to belong and a sense of hope. The writer seems to understand the role as Vanessa portrayed. Although, seeing Vanessa in a totally different movie than High School Musical, this role showed a great transition as she transcends into mature, extending to more drama-fill adult role. Rosario’s role although unexpected demonstrated that she can adapt from her traditional roles as a business woman, leader, or a take charge person to a believable drug addict mother who would step to any length just to gets her daughter back. You would think that the writer could sense these links and fill in the gaps

Although, the movie was good…I didn’t feel that the writer convinced us as some of the parts were useless and insignificant to the focus of the movie. I believe that the writer fails to make Brendan’s role as the dad more realistic. As to say once his daughter left the clinic, there were no scenes shown that he was out looking for his daughter. Everyone had to be blind to see that Jane was on drugs or something. Even being in the hospital there, no one who cared or paid attention to her irrational behaviors. I believe that writer wanted to see this as an emotional feel drama but at time it fell to deliver that exact point. It was too many holes in the story to capture the point.

I would recommend this movie because it was a good movie. I like that it was based on true events and that you got to see the real individuals that were a part of that story. It is recommended for parental guidance.
(Review by Dr. Dwanna Swan-Ary)

Posted by Dallas Movie Screenings at 9:24 AM