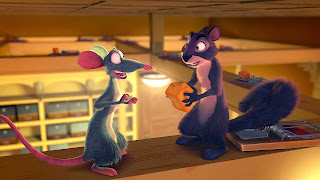 Director Peter Lepeniotis did a short animated film in 2005 about Surly Squirrel that involved pizza, a bank robbery and gun fire. Expanding that story, this new Canadian-South Korean computer animated feature still has Surly but this time there are nuts, a power crazed raccoon and a bank robbery. Written by Lorne Cameron and Lepeniotis, the story takes place in Oakton sometime in the late 50's. The animation is really detailed and great to look at, but the 3D effects are not worth the price for the glasses.

Will Arnett is the voice of Surly, a purple squirrel with a bad attitude. He looks out only for himself and his own needs. His best friend Buddy the rat (Robert Tinkler) is faithful despite Surly's treatment of him. One of Surly's misadventures results in the destruction of Liberty Park's winter food stash being immolated. The park's collective critters lead by raccoon (Liam Neeson) decide that Surly should be banned from the park. Andie (Katherine Heigl) another squirrel tries to defend him, but Surly, being surly stalks off in anger. Having to live in the city streets prove problematic with the gangs of rats, cars and pedestrians, but one day he finds the lost city of Nutlantis. Maury's Nut Store. Unfortunately the store is a front for gangsters who are tunneling under the bank next door in order to pull a heist. Somehow they have to get the nuts out without getting caught by the gangsters and their cowardly bull dog Precious (Maya Rudolph).

Meanwhile Andie and the park hero Grayson (Brendan Fraser) set out of the park to locate food. Grayson who is more brawns than brains gets separated from Andie, who finds Surly and the nuts. She tries to talk him into sharing the nuts with the park critters. Eventually she is able to strike a deal, but after reporting it to Raccoon, he decides to double cross Surly. Because who ever controls the food is in control. Surly and Mole (Jeff Dunham) decide to tunnel the nuts out too. Their plans run into trouble with the gangsters who keep closing their holes.

Most of the story has some nice lessons on friendship and loyalty. How power corrupts, and it seems kind of a dark theme for kids movies. The characters don't really lend themselves to being cute and cuddly. Surly is often times mean and ornery. On top of it all there is the inclusion of Psy's "Gangnam Style". Once you hear it in the movie, you are bound to think, wait, that is so last summer. But the catchy tune is fun and the closing credits with and animated Psy dancing with the animated characters will have kids dancing out the theater. Although the lyrics of the song have nothing at all to do with nuts or animals. Celebrity casting aside the movie is full of nuts.
(Review by reesa)

Email ThisBlogThis!Share to TwitterShare to FacebookShare to Pinterest
Labels: The Nut Job review