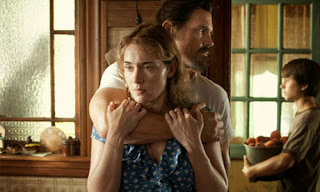 There's a scene in Jason Rietman's new film that rivals the classic pottery wheel moment between Patrick Swayze and Demi Moore in Ghost. This is new big romantic swoon worthy heart pounder with Josh Brolin and Kate Winslet making a peach pie that will be a favorite for women. Those women who enjoy those romance novels, everyone else will giggle on the ridiculousness. Joyce Maynard's 2009 novel of the same name has been directed and written by Jason Reitman about a mother and son who harbor an escape criminal managed to garner Kate Winslet a Golden Globe nomination for her performance.

Set in a small New Hampshire town in 1987 (filmed in Massachusetts and New Hampshire), the story is narrated by 13 year old Henry (Gattlin Griffith). He lives with his mom Adele (Kate Winslet) who has been suffering from depression. Henry spends Sunday's with his dad's new family, but Henry makes it his responsibility to watch over his emotionally fragile mom. Only going out of the house once a month for supplies it is a big traumatic experience for Adele that makes her hands shake. While shopping, Henry is approached by a bloody Frank Chambers (Josh Brolin) who with a quiet and dangerous manner gets Henry and Adele to take him with them to their house. Frank had just escaped from prison custody after an appendix operation. Frank promises not to hurt anyone, but ties Adele to the chair to make it look like she's being held hostage as the police and cruising the neighborhood.

Even though Frank is serving 18 years for murder he is too good to be true. He does repairs around the dilapidated house, fixes the tires of the car, mops the house floors, teaches Henry how to play baseball and best of all he cooks. The scene with the pie making makes women grin greedily. He also manages to break through Adele's fears and lets her learn to fall in love again. Meanwhile Henry is dealing with pubescent yearnings and confusion. His position in his mother's life is being usurped by Frank, although he appreciates the lessons that he hasn't been able to learn from his real dad (Clark Gregg). The new girl in town Mandy (Maika Monroe) a victim of a broken family, fills his head with possible scenarios of what happens with a parent falls in love with someone else.

What saves this movie from being another drippy Nicolas Sparks type of overblown bodice ripper is the caliber of acting from it's strong cast. Otherwise it retains the same slow, quiet steam of a summer Harlequin paperback novel. Frank's impossibly perfect manliness will make you roll your eyes, and think “guys don't really do that”. The small town intimacy of everyone knows your name and your business it's no wonder Adele is agoraphobic. The threat of Frank being discovered at the house keeps the movie slightly off kilter.
This is definitely a chick flick. Something for book clubs and a nice lunch afterwards for discussion.
(Review by reesa)