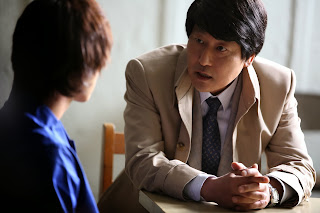 This new Korean movie which opens in the U.S. next week is the directorial debut of former web-toon artist Yang Woo Seok who has worked on the story Byeonhoin, also known as The Attorney, since the 1990's. The film opened with amazing success last December and has joined the 10m-admissions club joining just eight other movies in the history of Korean film. Based on the real life events of Korea's ninth president Roh Moo Hyun, it tells the story of how after he became a successful lawyer with only a high school diploma, he turned into a civil liberties activist.

Song Kang ho, who also starred in The Face Reader and Snow Piercer, plays Song Woo Seok. In 1978 Busan, he quits his job as a judge and decides he wants to make money. But he doesn't get that much respect from his fellow lawyers because he never went to law school (in Korea you can take the bar exam without law diploma) and he hands out his cards on the street. Considered a tacky move, like an ambulance chaser. He takes on easy quick cash jobs like notarizing real estate paperwork. It makes him money, and soon others are doing the same, so he takes on tax cases. He's challenged by his reporter friend that he needs to open himself up to the world. That life as a lawyer should be more responsible than just making money. In 1981 when a high school student Park Jin Woo (K-pop group ZE:A member Siwan) is arrested and detained for months under that National Security Act, he is asked by the boy's mother to help him. They discover the boy has been brutally tortured and forced to write a confession that a group of students were a secretly espousing communism under their guise of being a book club. Song becomes outraged and decides to defend the young man in trial that is bent on making an example.

The real life Roh was set on the course to becoming president by this trial even though his time in office lost the approval of his constituents during his last year in office. After that he was suspected of bribery and he committed suicide by jumping off a cliff. It was felt by many the investigation may have been politically motivated. And perhaps that may be the reason why this film hit a nerve for Korean audiences due to their current government has been tarnished by allegations of electioneering and the president's party had discredited a left wing group accused of pro-North Korean activities. People can relate to the atmosphere of the story.

For American audiences, it's a good solid story. It shows a man who despite his humble beginnings, works hard, tries to be a good father and faithful friend can work hard and find success. He carves the phrase into the wall of a place that he help build then later bought for his family that says “Never Give Up”. It's the motivator that carries him through when fighting for justice. Especially the justice that he hopes for the people of his country. Heavy handed but inspiring just the same. The film opens at AMC Grapevine on Feb 7.
(Review by reesa)