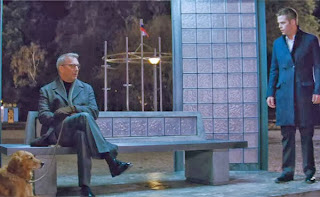 The latest reboot of Tom Clancy's character Jack Ryan adds to the already impressive series of movies adapted from Clancy's novels. Although this is an original story conceived by screenwriter Hossein Amini the screenplay is by Adam Cozad and David Koepp and directed by Kenneth Branagh. Chris Pine follows the footsteps of former Jack Ryans played by Alec Baldwin, Ben Affleck and Harrison Ford. Considering this new crisper, modern version of the character who in the books was born in 1950, the franchise will hopefully continue with new adventures as Mr. Clancy passed last October 2013.

Jack, a graduate student working towards his PHD in economics at Oxford University in England, drops out to join the Marines after 9/11. He is later badly injured in a helicopter crash that puts him in rehab, where he gets addicted to pain killers. His therapist is his future wife Cathy (Keira Knightley) who is studying to be an eye doctor. She challenges him to get off the pills and maybe she will go out to dinner with him. Jack is also being checked out by Commander Harper (Kevin Costner) who works for the CIA and offers him a chance to keep serving his country. They want him to finish his PHD, work at a bank and track terrorist money. It takes 10 years, but Jack comes across some Russian investments at his bank that causes concern. Harper wants him to come to Russia.

Jack is used to crunching numbers and analyzing data when he is suddenly confronted by some hostility and Harper promotes him to field agent. Jack meets Viktor Cherevin (Branagh) who is the head of the Russian bank and also at the center of the plot to cripple the global economy. On top of it all, Cathy shows up unexpectedly thinking that Jack is acting suspicious and she's afraid he's having an affair. Harper and reluctantly Jack decide to use Cathy to help distract Viktor while Jack has to break in the bank and hack into their system to find the evidence they need to thwart a terrorist attack.

Patrick Doyle's quick paced score underlines quite effectively the think quick or die harrowing action scenes. There's a time crunch chasing Jack as he hacks in to steal the info and the music makes the heart pound harder. As Jack discovers a more devious scenario besides the economic disaster, they are suddenly regrouping to stop it before the countdown starts. It's a chance to see the magic of Jack Ryan as he uses the CIA computer resources as he thinks outside the box and analyzes the situation to track down the sleeper cell. Cathy watching her future husband is as impressed as the audience.

This is a very worthy addition to the previous Jack Ryan movies in case anyone is willing do do a marathon of these movies one day. The filmmakers wisely kept the best of the character and Chris Pine like he did for Captain Kirk, makes Jack Ryan his own. This is the perfect January movie when there is nothing else out there. The perfect popcorn flick.
(Review by reesa)