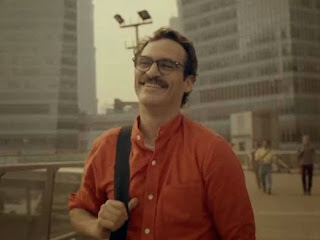 Director, writer and producer Spike Jonze has created a scenario that is not too inconceivable on how artificial intelligence may someday affect our lives. It has already received numerous nominations and won best film in critic awards. Officially opened in the major cities, it finally opens in Dallas this weekend. Certainly the best thing to offer during this January post holiday slump. Too bad we couldn't have viewed it before voting for our Best Of's.

Joaquin Phoenix, who usually scares most people since those weird memorable moments on David Letterman, is back acting and showing the world that he's worthy of accolades (Best Actor not for the Golden Globes). He plays Theodore Twombly who works for a company that writes letters for normal people at Beautiful Handwritten Letters.com. He's a gifted writer who seems to make every missive into a heartfelt story for long term clients. His own life is sad, lonely and depressed having separated from his wife Catherine (Rooney Mara) who he's known since childhood. Maybe that is why he tries out this new Operating System 1 that is designed to evolve like a human being. He asks for a female voice (Scarlett Johansson) who names herself Samantha. Using an earplug and small compact camera, Samantha is able to directly communicate with Theo no matter where he goes. Theo becomes quickly enthralled with Samantha and her enthusiasm in discovering the world. They both have long personal discussions on the meaning of their lives.

Theo, on the encouragement of his friends and Samantha goes on a blind date with the seemly perfect girl (Olivia Wilde) and they appear to be a good fit. But humans are not as perfect as an A.I.. The blind date has some human neurotic tendencies that makes Theo more susceptible to the ideal Samantha. They go on dates, have audio sex, and become a couple. Some of his friends think it's strange, but most are accepting since they too have relationships with their O.S.'s. Like Amy his neighbor who developed a friendship with her ex-husband's program that he left behind. Theo and Sam even go on a double date with Theo's co-worker Paul (Chris Pratt) and his human girlfriend. They all wear an ear piece to enjoy Sam's company.

Like Data on Star Trek Next Generation, A.I.'s are multi-taskers, and Samantha begins to communicate with others of her kind as they explore their unlimited potentials. Theo will eventually have to deal with his own limitations as a human being and learn to live with it. The weakness in the story is the end, but getting to that point, the movie takes you on a journey that's visually interesting, and mentally stimulating. While probably not the best movie of the year, it does deserve a nod and a nomination.

A somewhat unexpected result from the future fashion style of the movie created by costume designer Casey Storm is the high waisted trousers worn by the male characters. His designs are now on the racks for $195 in Opening Ceremony stores in the US for all those hipster cineaste in 2014. Other designs inspired by the film will also be available.
(Review by reesa)

Email ThisBlogThis!Share to TwitterShare to FacebookShare to Pinterest
Labels: Her review