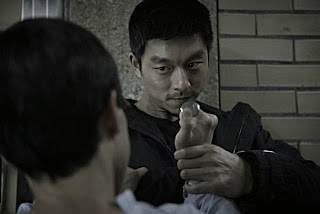 The South Korean homage to the Bourne type of action adventure genre is sharply realized by director Won Shin-yeon and writer Lim Sang-Yoon in the new feature, The Suspect. Gong Yoo who rose to fame in the popular Korean television drama Coffee Prince plays against his typical rom-com typecasting as the North Korean super operative. The hand fighting and car chasing sequences are just as exciting and inventive as anything seen in the US and that will please international audiences.

Ji Dong-Cheol (Gong Yoo) is a North Korean defector who is trying to live quietly as a hired driver for Chairman Park. Park an older wealthy former North Korean is partial to Ji as they came from the same town and looks after him like a son. Ji discovers Park being attacked while he's in bed, he quickly dispatches the murderer, but it's too late. Park gives Ji his eye glass case, telling him to bury it. Things get complicated after that when the police suddenly show up. They go after Ji as the main suspect in Park's murder and Park's two housekeepers. It becomes known that Ji is a part of specially trained agents who are the top of their skill set. Ji must not only clear himself from being framed as well as trying to find what happened to his family with the help of a documentary filmmaker who has ties to the case. She had been investigating the correlation of defectors the high number of suicides among the group.

Min Se-Hoon (Park Hee-Soon) a South Korean colonel who chases North Korean spies is put in charge of tracking down Ji. They had once had an encounter in the past where Ji had let him live and the Colonel Min has yet to come to terms with it as he was the only one who survived the mission. Ji had been abandoned by his government while on that mission. The filmmaker tells the Colonel that Ji is after the people who killed his wife and and may have sold his daughter as a slave in China.

Like in the Bourne movies, the use of CCTV to track their man is in heavy use as Min searches for Ji through the streets and malls. The various factions chasing Ji ups the ante, as well as the hand to hand combat using the agents superior fighting skills. Min gets suspicious when he discovers the other men chasing Ji are also members of his government.

This is a well paced and fascinating story and the acting is especially good by Goon Yoo in his first physically demanding role. South Korean cinema is well known for it's superb contributions to quality action thrillers like The Man From Nowhere, The Chaser, The Yellow Sea and A Company Man. It's nice that these types of films are opening up in major cities in the US. Look for The Suspect to open at AMC Grapevine this weekend.
(Review by reesa)