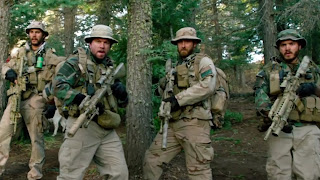 This is a brutal movie. The sound of the Navy SEALS falling off a cliff will make you cringe. This is Peter Bergs followup to Battleship (2012) which we all know that it was a terrible movie but this one looks different. It's different in all categories. Peter Berg directs a grisly look at war and the horrors that come from it. He manages to balance both the war aspect and the relationships between the characters very well. Two-thirds of this movie is one long action scene and the filmmakers really push that but like I said it also has heart to it and show that not all humans are bad. The acting is fantastic across the board. Mark Wahlberg is the main character but the standouts were the other guys in his group. Ben Foster is one of them and I have always said this guy should get more roles because he is dynamite anytime he is on screen. The cinematography is gripping and really puts in the middle of this war that is being portrayed which make the sound effects of the bullets, blood splatter and body hits even more realistic. The sound design in this fantastic as it is filled with brutal bone breaks and bullet injuries as I stated. The editing is fine as the action scene carries this movie. This a harrowing tale of war, a heartbreaking look at brotherhood and the good and bad side of humanity. 9/10
(Review by Chase Lee)