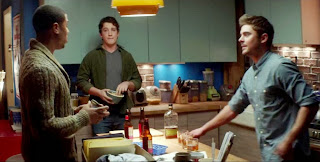 The newest bro-com to hit the screen features some nice looking 20 something's who are too immature and unwilling to commit to relationships. Encouraging each other to create a roster of women to indulge their sexual exploits so they can stay single to have fun. The directorial debut and writer of this fanciful tale, Tom Gormican is funny and apparently insightful of today's male dating culture. Which if what he shows is true, means that young men today are arrogant, dumb, and insensitive. And you certainly won't want them dating your daughters.

Zac Efron has pretty much shrugged off his High School Musical image, although his pretty good looks may keep him pigeon holed into these kind of light movies. (He also has Executive Producer credits on this film). He plays the party boy Jason who works as a book cover artist with one of his best friends Daniel (Miles Teller, Project X, Spectacular Now). The third member of their group is doctor, Mikey (Michael B. Jordan, Fruitville Station), who just found out his wife wants a divorce. Jason and Daniel decide that Mikey needs to get back into the game so they vow that the three of them will hit the clubs to build their rosters. They have a whole system of hitting on their marks, with the help of their friend Chelsea (Mackenzie Davis) as wingman to rope in the girl by complimenting their shoes, then introducing them to her “friend”.

Jason meets Ellie (Imogen Poots) in this smart cute chemistry filled encounter that leads to a one night stand that ends when Jason misunderstands thinking she's a hooker. The next day of course she turns out to be their newest client at this company. They get along so well, that soon they are spending more time together. Meanwhile, Mikey tries to get back with his wife, and Daniel is finding love with the last person he expected. Their plans to remain young, sexy and single are suddenly curtailed by the discovery that the women in their lives could be more important than the need to be footloose.

Of course their journey of taking responsibility with their hetero relationships fills the movie with slapstick and embarrassing situations as they fight tooth and nail becoming full functioning adults. There are silly moments like the costume Jason wears to Ellie's party, or the bathroom sex that gets the boys kicked out of a Thanksgiving dinner. Sometimes the jokes don't always work as in Daniels need to do number 2 every time he goes to Jason's place. Or it's hysterically funny when trying to figure out how to do number one after one is under the influence of Viagra. Potty humor seems to be the mainstay of male oriented movies. This will be an OK movie for women to take their dates to see for Valentine's day. At least they will have eye candy to distract them.
(Review by reesa)

Email ThisBlogThis!Share to TwitterShare to FacebookShare to Pinterest
Labels: That Awkward Moment review