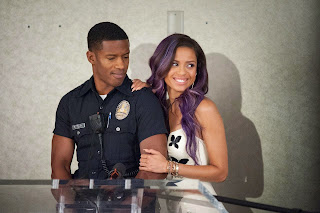 Director/writer Gina Prince-Bythewood who also did The Secret Life of Bees and Love & Basketball is back with another satisfying story which premiered at the 2014 Toronto International Film Festival. The story about the relationship of a young singer, her manager mother and an unlikely lover, also exposes the objectification of women in the music industry. While talent will help one get to the top, it's more of how much you are willing to sell as dictated by the men in charge of the record labels who promote the artist as a product.

Noni (Gugu Mbatha-Raw, who was brilliant in Belle) plays a Brixton English young woman who once sang a Nina Simone song as a kid for a local talent contest. Her mother Macy Jean (Minnie Driver) makes her give up her 1rst place trophy that she won because it wasn't good enough. Now grown up Noni is promoting her single she did with rap star Kid Culprit (Richard Colson Baker) at the Billboard Awards show. In the music video she is dressed in barely there costumes, singing suggestible lyrics, and tasteless tramp dancing. She is being pimped to become the next big thing. Noni has a moment of crisis after the performance and when she returns to her police guarded hotel room, her mother and Kaz (Nate Parker) the guard find her sitting at the edge of the balcony in a state of distress. Using his police skills, Kaz tries to talk her from the edge, and ends up saving her life when she makes a leap. Her suicide attempt is hushed up by her record label who wants to delay her record release until the scandal has blown over. Her mother insists that everything is OK, that Noni was just a little drunk and had an accident. They try to pay off Kaz to make sure that he doesn't tell the truth. Tabloids try to buy the truth from Kaz as their exclusive.

Kaz's father Captain Nicol (Danny Glover) advises his son to keep up the charade. Kaz is being touted the hero and they want to use this moment in the spotlight to promote Kaz's introduction into politics. But Kaz is a decent thoughtful young man, and the lie is hard for him to justify. He's worried that Noni is not getting the help she needs. So he talks to her again and thus begins their attraction to each other. Is Noni being nice to him to keep his mouth shut? Is Kaz using her to boost his career goals? Macy and Captain Nicol think their budding relationship is not good for either of them. Noni's image would not sit well for and up and coming councilman.

Gugu Mbatha-Raw is beautiful and vulnerable as the singer who has lost her way by doing everything for everyone and nothing for her self. Kaz is frustrated by her celebrity lifestyle especially when he's able to see the talented and sensitive young woman underneath the weaves and makeup. The movie follows Noni's journey to discover and accept her real self. Kaz is also being manipulated by others to fit a certain image of politics. While it's a touching love story about two improbable love birds, it's also a commentary on the sexualization of women in music and the struggle to win artistic independence.
(Review by reesa)

Email ThisBlogThis!Share to TwitterShare to FacebookShare to Pinterest
Labels: Beyond the Lights review