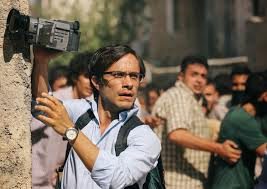 Rosewater is the directorial debut of political comedian, Jon Stewart, of The Daily Show. And it is a solid, moderately impressive first effort. The film is the retelling of the arrest and imprisonment of Maziar Bahari in Iran during the political elections. Bahari is a journalist who was born and raised in Iran. In the year 2009, he returned to cover the presidential election at a time when Iran was trying to make a change and there were charges of election fraud. Protests followed the election, mostly put on by the young, educated and informed (via forbidden satellite dishes which brought in all manner of information to those hungry for it.....and for political reform. They occurred as a challenge to the results that kept President Mahmoud Ahmadinejad in office. Soon after, Bahari filmed news video of rioting protesters being shot by police and released it to the world..His arrest came as a result. It did not help him that his father had been imprisoned as a communist under The Shah and his sister had also spent six years in prison before her early death.

The film was made in Jordan and stars Gael García Bernal as Newsweek journalist Bahari. Iranian actresses Golshifteh Farahani and Shohreh Aghdashloo (House of Sand and Fog) star as Maziar's sister and mother. Soon after his mother's apartment is invaded and Bahari's room is searched for "pornography" and illegal videos, he is taken, imprisoned in solitary confinement, and tortured. One would have expected a full blown expose on the horrific conditions in an Iranian prison for "spies", but most of the torture in this film is extremely psychological. The verbal delivery of words, the removal and application of a blindfold (which he wore most of the time) and the touch of a hand on a shoulder or head are conducted in ways that make one's skin crawl with the desperation a 118 day imprisonment must have felt like. A scene where Bahari is outside, feel for and reaches with his hand the area of the wall where the sun shines is quite powerful. He cannot see it, being blind folded, and only can access it by feeling for its warmth as its light moves higher up on the prison wall.

Ironically, is was a satirical piece starring Bahari, in real life on the Daily Show that led the prison officers to feel they had "proof" that Bahari was indeed a spy. Middle Eastern Rosewater manufacturing was shown in the very beginning of the film, but what is not intially realized by the viewer is that one of the interrogators or "specialists" (played by Kim Bodnia) always smelled of Rosewater. The sensory deprived Bahari would always smell it during a "Specialist session". As time wears on, Bahari must find ways to stay optimistic and hopeful, and know that others on the outside had not forgotten him. He transforms his experience into a sort of coming out before he is released. Bahari brought a certain level of comedy into the mix, and exerted what freedoms he still had and expressed himself in ways that he still could. To see his emerging self empowerment on the screen is one aspect that helps to keep the viewer engaged and interested. That in the face of possibly losing his life, these things could sustain him in solitary is a real life testament to Bahari's fortitude. Bahari's wife ended up leading an international campaign to have her husband freed, and media outlets in the west keept the story perinent. Stewart makes use of some visual image film techniques that really add to the enjoyment of the film. Bahari eventually told his story through a New York Timesbest selling book. "Then They Came for Me: A Family's Story of Love, Captivity, and Survival." The film Rosewater is a finely put together and powerful drama that reminds us of the power that the human mind can have over its circumstances.
(Review by Cheryl Wurtz)