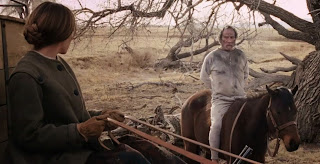 If one is wanting to see and experience the harsh, stark reality that was the Midwestern prairie settlement period, check out "The Homesman"
(A homesman is generally referred to as a man who takes immigrants back to their original home.) starring Hilary Swank, Meryl Streep, Tommy Lee Jones, John Lithgow and James Spader, four of who have surprisingly small roles in this Western.

Set in Nebraska in the mid 1800's, the setting and lifestyle portrayals appear a very accurate picture of what life must have been like. The land is stark and the homes and daily life even starker. Basic existence was extremely difficult, unpredictable, full of hazards and pitfalls and could actually drive you crazy. The film opens with a variety of scenes of four different women, three who have gone utterly mad on the prairie. The horror of their individual plights is quite hard to watch their horrors unfold onscreen.
Mary Bee Cuddy (Swank) is a strong, independent (securely so) and very capable woman who maintains her own home and land in meticulous fashion. She is single but not for lack of trying. She is a true Midwestern feminist before feminism hit the mainstream. The local men she tries to woo call her too plain to marry but when the local minister has to select someone out of the community to retrieve the three women gone crazy and deliver them back home to Ohio, Mary is the able bodied one elected to leave home in a secure wagon and do just that, becoming the homesman. While a pillar of religious, moral and community strength, inside Mary is suffering from extreme loneliness and at times seems quite depressed at her situation and string of marriage rejections. As a result, she is very compassionate and understanding with the stricken women she is carrying back to their families. Jones portrays George Briggs, a squatter who is ousted from a sod home and left to hang from a tree when his mount takes a mind to move. Mary Bee finds him, saves him and enlists his help in her quest. So the trilogy of the Good, the Bad and the Ugly is completed.

Along the trail, the party encounters Indians, a lack of food and shelter, the elements, abandonment, the escape of one of the women and what it took to find her and get her back. All the while, the women must be bathed, toileted, fed, and cared for in a compassionate manner, which Mary Bee models. This is REAL life on the prairie.
Spader plays Aloysius Duffy, a rather smug businessman, trying to gain investors towards building a community around his hotel. His rejection of the party for food and lodging ends badly. Streep is Altha Carter, a minister's wife, who's home is the final destination for the three women in Iowa. Haile Steinfeld appears in the town in Ohio as Tabitha Hutchinson, who George attempts to woo quite quickly with little success.

Be forewarned. There are several scenes difficult to watch involving rape, dead bodies, infanticide, disease and suicide. The film was a competitor for the Palme d'Or at Cannes in 2014 and is based on a book published in 1988 and written by Glendon Swarthout. The movie, a Western through and through, has an unusual tone and feel to it that may be hard to come to terms with. It clearly plays along the edges and its art house notes are evident. This is a film that will stick with this three way descendant of prairie-settling immigrants for a long time, knowing vividly why a female ancestor and her brother only lasted one year after the Oklahoma land rush. The prairie life is shown as punch you in the stomach hard. With Jones as director, this tragic Western is ultimately unforgettable. Its conclusion, and a turning point before the ending, may leave you a little bit unfulfilled and confused but what is not to ultimately admire about a piece that is written, produced, directed by and stars icon Tommy Lee Jones. Rarely is this talented, athletic, St Mark's alum, Harvard educated, Academy Award winning Texan very far off the mark.
(Review by Cheryl Wurtz)

Posted by Dallas Movie Screenings at 12:59 AM