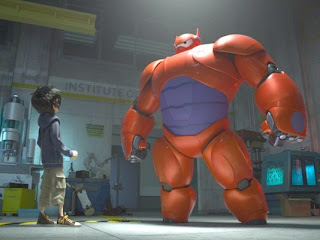 Considering that Marvel Comics's parent company was acquired by The Walt Disney Company it's a small leap to expect some of their superhero's would be made into an animated adventure. Based on the comic of the same name, directors Don Hall, and Chris Williams worked from a script by Robert L. Baird, Dan Gerson and Jordon Roberts. The new features differs from the Disney-verse of homogenized worlds by offering Asian characters that are actually voiced by Asian/American actors.

Set in the San Francisco, but now called San Fransokyo with the Asian themed architecture on the red towers of the SF Bridge, 13 year old Hiro (voiced by Ryan Potter) dreams of being a “bot fighter”. People illegally bet on small robots fighting each other for money and prestige in dark allies of the city. Hiro wins but has to escape the retribution of the loser with the help of his older brother Tadashi (Daniel Henny). Tadashi would like Hiro to use his big brain and apply to his highly rated technical university. He takes his brother to meet his friends in his department who are working on some amazing new inventions. He even impresses Hiro with his own creation, Baymax (Scott Adsit), a doughboy/Micheline Tire Man shaped “care bot”. The robot with the inflatable body comes to life when someone needs medical care. He's programed to assist and when a person says they are satisfied with their care he goes back to his traveling case and deflate for storage. Hiro is impressed with his brothers friends and their work and enters a showcase to win a placement at the school. He's created some microbots that can be manipulated by brain waves. He impresses Professor Robert Callaghan (James Cromwell) and multi-millionaire Alistair Krei (Alan Tudyk) who wants to buy Hiro's new tech much to Callaghan's displeasure. Aunt Cass (Maya Rudolph) who has raised the boys for the past ten years is thrilled that Hiro is going to college when he wins the showcase.

At the end of the event, the building mysteriously catches fire and Tadashi runs into the burning building to save the professor when the building explodes. The pain of losing his brother, Baymax is activated to help Hiro who diagnoses him with “puberty”. He callas in Tadashi's classmates to support Hiro. Gogo (Jamie Chung), Fred (T.J. Miller), Wasabi (Damon Wayans Jr.), and Honey Lemon (Genesis Rodriguez) join forces with Hiro when he and Baymax discover a warehouse full of his previously thought destroyed microbots being manufactured and controlled by a Kabuki masked villain. Believing it was Krei who was upset that Hiro didn't want to give him the tech, they make a plan to unmask the bad guy. The six wanna be crime fighters including Baymax who has been programed (like in the Matrix) to fight in armor created by a 3D printer go after the Kabuki who seems to want to destroy Krie's building. The action moves quickly, there is even a portal to another dimension.

The movie is sure to enchant the young ones with it's cuddly major character of Baymax. He's calm, reassuring, and eager to help. When his battery runs down, Baymax acts like it's drunk and calls Cass's fat cat a furry baby. There are some lessons to be learned, of living up to potentials, the healing of friendship, the sacrifice of doing the right thing and being a nerd is something to aspire. The Manga type of artwork makes it easy on the eyes. The heroics opens up a franchise for future adventures, and that's a not a bad thing either.

The movie is also preceded by a wonderful little short animation called “Feast” that is worth the price of admission all on it's own.
(Review by reesa)