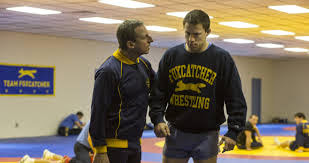 Has Steve Carell ever terrified you? He will now. This is a wonderful, frightening character study that is an extreme slow burn. Bennett Miller, director of “Capote” and “Moneyball”, brings us this dark and interesting story about Mark Schultz, played by Channing Tatum, and he seeks a coach and mentor in, the wealthy, Jean du Pont, played by Carell, to be the best wrestler and escape the shadows of his older brother Dave Schultz, played by Mark Ruffalo. What Miller does best is let us, as an audience, exploring these characters and see their demons that plague them. This is a brutal story of trust, betrayal and acceptance and I thought Miller outdid himself, because I really like “Capote” and “Moneyball”. I do find “Foxcatcher” more bizarre and interesting than the other two even though I love all three. The acting is off the charts good. These are performances to be remembered in an actor or actresses career. All three transform themselves and really become these characters becoming unrecognizable, Carell especially. Carell has been getting a bunch of buzz but my favorite is Tatum. He completely changed my view of him as an actor, even though I saw some hope when he did comedy in the “Jump Street” franchise. Carell will most likely be nominated, but I wish all three could be. The cinematography is gorgeous and bleak at the same time, with wide shots to really capture the isolation these characters face. It’s just a beautiful looking film, then again all of Miller’s films are. This is where the movie might lose people. The editing and pace of the film is a slow burn and may seem really long to people, even though is only two hours and ten minutes. I like the pace of it because of the disturbing build-up this film has to a shocking conclusion, to where you will sit back and wonder how a story like this even happened. I did feel the drag a little bit but it picked up soon after. This is definitely in my top ten of the year as one of most compelling, disturbing character studies I have seen in awhile. I am going big. 9.5/10
(Review by Chase Lee)