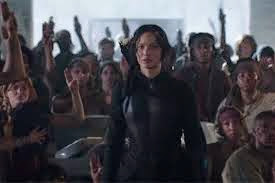 The third book of The Hunger Games series based on the trilogy by Suzanne Collins has been broken down into two movies. The screenplay written by Danny Strong and Peter Craig ends the story with the expected cliff hanger to whet the appetite of all young adult book and movie fans. For newbies to the story, it's advised to have seen the previous films (you don't have to read the books unless you want to) to get sense of the world of Panem and why Katniss Everdeen is the reluctant hero of the rebellion. Directed once more by Francis Lawrence the build up is setting Katniss on the path of fighting the evil President Snow in the Capitol. But like all stories that have no ending, it just makes the viewer more frustrated having to wait until next year to see the conclusion.

Jennifer Lawrence is back as Katniss, the tribute that escaped the Third Quarter Quell and shattered the Games forever by shooting an arrow that destroys the force field of the arena. She wakes up in District 13 which has become the spearhead of the new rebellion. District 13's President Alma Coin (Julianne Moore) wants Katniss to become the Mockingjay poster child. She reluctantly agrees only if the still captured tributes in the Capitol are granted immunity. Peeta (Josh Hutcherson) is being used as spokesperson for the Capitol to manipulate Katniss into not joining the rebels. Angry and confused Katniss is distrustful of Coin and Pultarch Heavensbee (Phillip Seymour Hoffman, who finished his filming for Part 1 before his death) who want her to film these propaganda clips to inspire revolt. Her old boyfriend Gale (Liam Hemsworth) takes her to her old District 12 which was destroyed after she escaped. Later when Katniss and the film crew (led by Natalie Dormer as Cressida) visit District 8. The injured at the hospital give her the Mockingjay salute and she realizes that she may be part of that hope.

The movie crawls slowly as Katniss angsts over her role in the plan, although she knows that the government should be overturned. She is also worried sick over Peeta's messages and wants District 13 to rescue the captured tributes including Finnick's girlfriend Annie, and Johanna (Jenna Malone). Effie Trinket (Elizabeth Banks) now forced reluctantly into District 13's overalls lightens the movie's dark tones as Katniss's stylist and manager. Woody Harrelson as Haymitch Abernathy who is now sober is back offering sound advise and a shoulder to cry one. President Snow (Donald Sutherland) who has an affinity for white roses (the reason is given towards the climax of the movie) remains the boogie man who is one step ahead of the rebels taunting and killing along the way.

Jennifer Lawrence is still the next big thing on screen. As Katniss they bring her long hair tumbling around her face to give her a more vulnerable and fragile look. Then more fierce in her designer rebel outfit created for her propaganda clips. Her best accessory are the exploding arrow heads. Sutherland eats up the screen as the smarmy President Snow and his creepy white roses. And Hutcherson who must of lost a ton of weight as the tortured Peeta who wins Katniss's heart from the stoic Gale.

This movie will make money no matter what. If you are fan of the movie and there are ton of them out there, it's a nice addition, but still seems stretched out and lacking. Lacking an ending.
(Review by reesa)