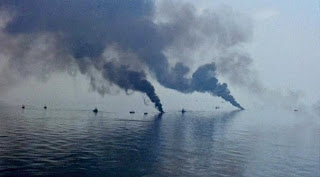 One thing that I always have to question when going into a documentary is will this make me uncomfortable. If it does, well then I am impressed by the presentation. “The Great Invisible” started in a very mellow matter and then started to just shock with a story of a father’s death on the Deep Water Horizon oil rig. The explosions that start to come into the screen are just blatantly horrific. The issue being investigated by the documentary revolves around the after effects of the now famous 2010 BP oil spill. The stories of each person interviewed in this film deal with how the spill affected their businesses and lives. Some of these people were actually on the oil rig when the explosion happened and the things they say just make somebody almost weep. There are stories of crawling to a life boat out of a room on fire coming from these dedicated workers who were involved in a life and death situation. One of the leaders of the crew says in the film that he went from a six figure salary to less than $1000 a month after the accident.

What really made me furious was that multiple specific inadequacies with the rig were quoted as to have been notified to BP before the accident. This film made by Margaret Brown, who definitely looks like an advocate, shunned big companies such as BP for their greed and lack of compassion. The oil spill was such a huge issue and still is today. It was committed by a company with such power and resulted in the deaths of several workers. Businesses in the Gulf suffered to the point of people going to food pantries. I think Ms. Brown covers so many emotions from anger to extreme sadness from people. She very well showed the shock that was still in the workers of the Deep Water Horizon.

The documentary revealed a man’s side of kindness to the people of the Bayou in the way that he tries to spread the word out to people about resources. Ms. Brown shot workers who were down in work hours and were wondering how they were going to survive. She made me personally connect with the uncertainty of what was going to happen to the mass of people involved. I felt that seeing the movie was a hugely significant investment of my time. The gallons upon gallons of oil shown gaping out of an underwater pipe means a whole lot more to me now than it did 4 years ago.
(Review by Wyatt Head)