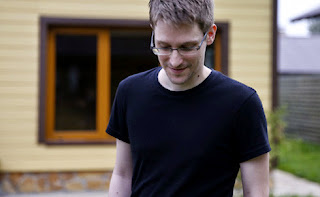 Wow, how scary is it really? Are we just cattle moving in a heard and blind by our entertainment and funny videos? “Citizenfour” drags us right into the sea of Edward Snowden’s serious delivery of possibly the US’s most famous piece of classified information. This film is about the NSA super hack into the privacy of millions upon millions of unaware Americans as well as some countries. It follows the name read on multiple TV screens at the time of the release of this information, Edward Snowden.

Now being a citizen I used to think as probably a lot of people did that this was just another guy in big trouble with the US. I had no idea of what Mr. Snowden went through or was trying to do with what information he had. This film revealed the intimate room where the release of this humungous story took place. Edward Snowden is lying on a couch spewing out in layman’s terms the software the NSA had to gather millions of records from telecom companies. He was filmed by documentary filmmaker Laura Poitras who was taking a significant risk by just being there. The events around that time take place one after the other. The White House says that they want Snowden back for a “proper hearing’ and that they were going to do something about the NSA a while ago. A man who worked for the NSA for decades reveals what he was told to do while there and that he was threatened by authorities to stay silent. Meetings are held by countries and Europe to address this imminent problem. This was and still is a magnificent problem that yelled to American citizens that what they did or said was on a screen accessible within the click of a button. Privacy was thrown out the window and life was monitored by a governmental agency. The man who interviews Snowden is Glen Greenwald, a journalist living in Rio de Janeiro. The man questions the safety of all of them and what information Snowden has. There are constant looks out the window for spies from the hotel room where the camera starts rolling. If the public isbelieving in a democracy that is strong, I think this film proves an opposite point. We are told by this piece to point attention towards majorly important issues that will shape our lives in the future and now. The public citizen is told to stand up for injustice in the most hammering way possible.
(Review by Wyatt Head)