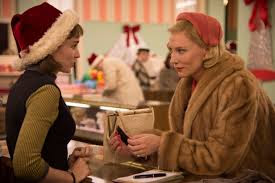 Carol is a throwback to the melodramatic angst of old black and white movies. But the subject matter would not have been accepted as it is now due to our more enlightened points of view. This film and Danish Girl are hitting all the hashtag trending points in the year that same sex marriages have finally become legal in the U.S. Director Todd Haynes handles the sensitivity of the story based on Patricia Highsmith's novel The Price of Salt (published in 1952) with a screenplay by Phyllis Nagy. This is just another kind love story with beautifully grainy cinematography by Ed Lachman, great costumes and makeup, period cars, and fantastic performances.

Rooney Mara plays Therese Belivet, a shop girl who works at a big store in the toy department. It is there she notices a glamorous older woman who returns the approving stare. Carol Aird (Cate Blanchett) purchases a model train set on the recommendation of Therese. When Carol leaves Therese notices that Carol had left her gloves behind on the counter. Therese mails the gloves to Carol's home in New Jersey. To thank her, Carol invites her to lunch. The two have a connection, they are conversing easily, and they are attracted to each other despite their age gap. Carol invites her to spend the Christmas holiday with her and her daughter Rindy. Everything is fine until Harge (Kyle Chandler) shows up saying he's taking Rindy with him on a business trip. When he sees Therese, he thinks Carol is up to her old tricks, as she used to have a relationship with her best friend Abby (Sarah Paulson). Carol is devastated when she learns that Harge is suing her for custody of their child due to a morality clause.

Therese's boy friend Richard (Jake Lacy) is upset with her because he wants her to go to France with him and get married. He tells her that her crush on Carol will fail when Carol grows tired of her. They break up. Carol invites her on a road trip in her 1952 Packard to escape the stress of the impending divorce. It is on this aimless travel that they bond and give in to their attraction. Unknown to them a P.I. hired by Harge is gathering evidence of their affair to use in court. Carol leaves Therese to return to New York and fight for her daughter in court. Heartbroken Therese refuses to take Carol's calls and pursues her dream of being a photographer at the New York Times.

Being in same sex relationships back in the 1950's was against the law in most places. Having the courage to live out of the closet was a brave choice and one that is not easy. Carol not wanting to drag Therese's name in the mud if the evidence is shown in a custody court trial is ready to compromise with Harge for their child's sake. And despite Therese's attempts to get over the affair, realizes that she needs Carol as much as Carol needs her. Love conquers all.
(Review by reesa)