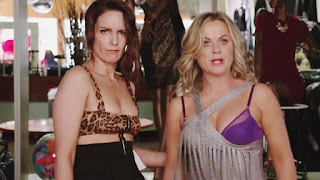 Opening
Tina Fey and Amy Poehler are, arguably, two of the funniest women to ever walk to the earth. With that said, they are as believable as sisters as I am identical twins with Ryan Reynolds. I can’t see it. I will never see it. How was this movie and how come I am not reviewing the most highly anticipated movie, Roadkill 4, I mean, Alvin and the terrible-munks 4? Let’s get reel and break this down.

Pros
This was a hit and miss comedy and I will say it was enjoyable enough to stick through and when the jokes hit, they hit hard. However…

Cons
…I felt like Jason Moore, director of Pitch Perfect, didn’t really add anything new and it felt like most generic R-rated comedies. There was a lack of risk being taken and it was all played safe, in terms of a raunchy comedy. Does he create an enjoyable environment with two leads that you could watch for days? Yes, he does. But it was very, very average. The writing, like I said in the pros, was hit and miss, but unfortunately for me, there were a bit more misses. This is also not the most extravagant story either and the structure was about as basic as you can get.

Pros
In the opening, I said Amy and Tina are two of the funniest women and I stand by that. They were ok. It’s weird to say because it’s their own film. I actually preferred the whole supporting cast more. From Ike Barinholtz, to Bobby Moynihan, to the always-hilarious Maya Rudolph, the supporting cast had all the good jokes and most of them killed and had me in stiches, particularly Bobby.

Cons
After thinking about it, I don’t see Tina Fey as the outspoken, rowdy child. Everything I have seen her in, I never thought about going against her type cast and there is a reason why, it didn’t work for me in this. I think Amy and Tina should have switched and have Amy as the rebel child and Tina as the studious one.

Pros
Comedies don’t particularly have groundbreaking cinematography and this is no exception. It’s shot well and there is nothing to complain about. If anything, all the party scenes in the movie were shot well enough to where I wanted to be there partying with these crazy characters.

Pros
The party scenes are definitely the most fun part of the entire film and they fly by with jokes hitting from everywhere making the pace exponentially faster.

Cons
The beginning does kind of dragged with a desperation looming with raunchy jokes, and since most miss or they are simply trying too hard, it slows the movie down.

Overall
I know it seems like I am ragging on this movie, but honestly, with all the blandness and mediocre jokes, I would be lying to you if I told I didn’t enjoy this movie. I will watch anything with Tina and Amy because they are super talented and if it was anyone else involved with this project I wouldn’t have enjoyed it nearly as much. If you want to watch an enjoyable comedy this holiday season, I will recommend this and not another certain comedy I will be reviewing next week. This is also miles better than Tina and Amy’s last outing, Baby Mama. That movie was garbage