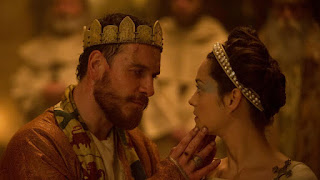 From the gate, Shakespeare's classic play is a major downer. Heavy duty treachery and craziness ensues. It's the one big dramatic role that actors can sink in their teeth and emote to their hearts content. For modern audiences, it has all the elements of a typical movie plot, but the Old English language of The Bard is difficult to understand so it limits who will actually spend money to see this film. Directed by Justin Kurzel, the screenplay was adapted to the movie format by Jacob Koskoff, Michael Lesslie and Todd Louiso. What sets this production apart is the amazing cinematography by Adam Arkspaw. The cold, desolate Scotland landscape, the fog, the rain, and mud is very visceral. The actors give it all it's worth, but the poor enunciation made it difficult to understand.

Michael Fassbender, who will most likely be nominated for Steve Jobs, gives an Oscar worthy consideration for his flawed Macbeth. Marion Cotillard will no doubt be considered for her manipulative Lady Macbeth. The beginning of the film has them mourning the loss of their child before Macbeth is off to the final battle of the civil war that has him fighting for King Duncan. After his victory, he is met by three mysterious women who foretell he is the “Thane of Cawdor” and future King. His first ally Banquo (Paddy Considine) will be a father of kings before they take off. Lady, hearing the news, lets greed and ambition encourage Macbeth to kill the king when he comes to visit, thus fulfilling the prophecy. Macbeth doesn't take out Malcolm, the King's son, and the young man flees to England thereby lending suspicion upon his absence. Macbeth, being the next in line is asked to become king.

King Macbeth is troubled by the fact that he has no heirs, and the words of the witches remind him that Banquo's son is likely to inherit the throne. Macbeth already feeling the guilt of his crimes, is slowing slipping off the handle, and has Banquo and his son killed, but the boy escapes. At the big dinner, Macbeth begins to hallucinate Banquo causing him to rave. Even the Lady has trouble keeping him from having a meltdown in front of everyone. Lord MacDuff (Sean Harris) and his wife leave and he has them escape the castle while he goes to England. Unfortunately, Macbeth tracks down the wife and kids who he puts to death by fire. By now, even Lady Macbeth is feeling the effects of their deed trying to wash out those damn spots from the daggers that killed the king. MacDuff swears vengeance on Macbeth for the loss of his family, bringing 10,000 English troops to the castle for the last showdown.

The battle scenes are slow-mo bloody and intense. It feels at times like Braveheart without the inspiring speeches. Fassbender is amazing as usual as the mad MacBeth and Cotillard is convincing as the power hungry spouse, but somewhere along the end, when things fall apart for them, it seems to lose momentum, where you know that only heart break and tragedy is the ultimate end. It maybe uneven, but it at least makes it less stiff and boring than a Masterpiece Theater production of the play.
(Review by reesa)