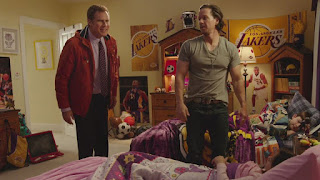 Opening:
Daddy has come to your room and has informed you that he is leaving home and isn’t coming back. Kids, daddy ain’t home anymore. Buckle up; this is going to get rough. Let’s get reel and break this down.

Plot:
A mild-mannered radio executive strives to become the best stepdad to his wife’s two children, but complications ensue when their freewheeling and freeloading real father arrives, forcing him to compete for the affection of the kids.

Pros:
None…that’s not fair. There was one joke I smirked at, but if I had to make one complaint…

Cons:
The writing and the jokes are abysmal. They all seemed like the jokes that were at the bottom of a trashcan and some writer decided he could put them in a movie and try to get a sympathetic laugh out of the audience. 99% of the jokes are a miss. It’s a bland setup and execution with no creativity in the jokes and overall was confused tonally. The directing was about as lazy as you can imagine. The thing that bugged me the most is that the movie was battling with a PG rated family tone with hidden innuendos for the adults and slapstick for the kids and with a PG-13 rating that was littered with typical Ferrell humor. They should have made it PG and I would have respected it more.

Pros:
There was acting involved? Well, could have fooled me.

Cons:
It seemed like everyone was going through the motions and it looked like no one was really trying. This is weird for me to say because I liked Ferrell and Wahlberg’s chemistry in The Other Guys.

Pros:
This was shot on professional cameras from a studio? Well, could have fooled me.

Cons:
It’s got a sterile look to it, so I felt like I was watching the inside of a hospital.

Pros:
This movie had rhythm and a good pace to it? Well, could have fooled me.

Cons:
This was brutal to sit through and every time a joke was uttered a piece of my soul died.

Overall:
I just don’t get it. I like Will Ferrell and I even love some of his movies that make me laugh myself sick. But this was a rough year for Ferrell with this and Get Hard. This is in the top three worst comedies of the year with Vacation and Hot Tub Time Machine 2. The thing is my audience was laughing their butts off and I was definitely in the minority. The only reason this movie doesn’t completely fail for me was because I was in a coma while watching and one joke made me smirk.