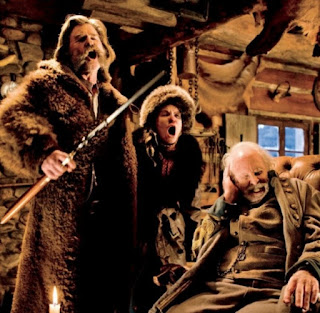 Everyone looks forward to Quentin Tarantino's new work from the success of his previous films and this one is a worthy contender. A bit too long and dialogue heavy, it even has an intermission. The first half of the movie is a lot of character exploration and beautiful snowy vistas that could have easily been cut and saved your butt about thirty minutes. The film almost was not made when a copy of the script was leaked, but Tarantino changed his mind during a live reading. A roadhouse release in 70 mm format is being distributed first before the normal digital release on New Year's Eve. Either way, it's worth a viewing no matter what format.

The movie contains some very memorable characters beginning with Major Marquis Warren (Samuel L. Jackson) who flags down a stage coach in the middle of a snowy mountain road. He's got a bunch of frozen dead bodies that he hopes to take to Red Rock to collect the bounty. Inside the coach is John Ruth (Kurt Russell) who is taking the handcuffed Daisy Domergue (Jennifer Jason Leigh) to be hanged. A long the way they encounter Chris Mannix (Walton Goggins) who claims he's the new sheriff of Red Rock. They arrive at Minnie's Haberdashery, a stagecoach lodge, to hold up as a powerful blizzard approaches. Bob (Demián Bichir), a Mexican, greets them, saying Minnie and her husband are off visiting relatives and left him to look after things. Inside they meet Oswaldo Mobray (Tim Roth) who says he's the Red Rock hangman, Joe Gage (Michael Madsen), a diary writing cowboy who says he's on the way to see his mother, General Sandy Smithers (Bruce Dern) who fought for the Confederates.

Warren is suspicious of Bob because Minnie would never leave her lodge especially in someone else's care. And John Ruth doesn't trust anyone, demanding that everyone hand in their weapons except for Warren and Mannix. He thinks they may want to protect Daisy who is one piece of work. John Ruth manages to punch and kick her at every opportunity while she cackles like a maniac licking the blood on her mouth. There is a lot of story set up that tumbles like a ball of snow gathering speed and momentum by the 2nd half of the movie. It's filled with guns, knives, blood splatters, poison, vomit, bad language and full frontal nudity. There's a bit of Agatha Christie whodunit of And Then There Were None as the lodgers are weeded out. There's a murderer in the lodge and only Daisy has seem who done it.

The take a way of this film is that Jennifer Jason Lee should get a supporting actor award for her brutal, stone cold crazy turn as Daisy Domergue. No matter what you feel about the shock of watching her get smacked around by John Ruth, you have to remember it's a Tarantino film, and you never know what's coming next.
(Review by reesa)

Email ThisBlogThis!Share to TwitterShare to FacebookShare to Pinterest
Labels: The Hateful Eight review