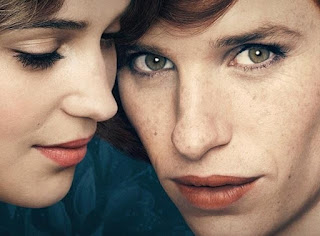 It's complicated to say the least when dealing with telling the story of a real life transgender that is based on pseudo-biographical novel of the same by David Ebershoff. Screenwriter Lucinda Coxon worked on the script in 2004 which went through twenty drafts before director Tom Hopper (The King's Speech) chose an older version of the script. Considering the recent trend of LBGT issues making the headlines, it would seem this would be just a concept story, but there is a large emotional journey in the film that transcends even the most hard hearted movie goer. This is truly a love story.

Einar Wegener (Eddie Redmayne) is a renown landscape artist in Copenhagen in the early 1920's. His cold sterile pictures of trees that he constantly paints brings him uncomfortable acclaim. His portrait artist wife Gerda (Alicia Vikander) works just as hard, but doesn't get the recognition for her work. One day she asks Einar to pose for her as a substitute for her ballet dancer friend Oola (Amber Heard). He puts on the stockings and shoes, and that act itself opens a portal in Einar's psyche that he can't ignore. Soon he is wearing his wife's silky night gown under his suits. Greta who is totally devoted to Einar embraces her husband's new kink. When they are invited to a party that Einar is loathed to attend, they explore the idea of him going in disguise. They take some clothes from the ballet theater and dress Einar as a woman. Suddenly, Einar realizes what he is missing in his life. He is ready to explore this new revelation as Lili Elbe.

Greta begins to paint Lili in a series of portraits which sells very quickly bringing her fame and a chance to show her work in Paris. While they live and work in France, Einar has stopped his own work while exploring his alter ego Lili. His sexual identity confuses Einar and he seeks medical advice, with doctors wanting to commit him. Until he meets a doctor in Germany who understands him and Lili becomes the first recipient of male to female sex assignment surgery. Greta confused and upset by the loss of her husband, seeks solace and support from Einar's child hood friend Hans (Matthias Schoenaerts).

The story is told through the eyes of Greta for whom Alicia Vikander will probably get some accolades for her portrayal. She is more like the supportive husband in her relationship with Einar, who is more sensitive and delicate. Redmayne who won an Oscar for this role as Stephen Hawkings last year, does another amazing performance as the confused Einar/Lili. It's no doubt that it takes a strong person to come to terms with their sexual identity especially in those years. Lili's diaries have inspired many transgendered individuals over the years. This is just not a tale of being transgendered, it's the story of two soul mates who love each other unconditionally.
(Review by reesa)

Email ThisBlogThis!Share to TwitterShare to FacebookShare to Pinterest
Labels: The Danish Girl review