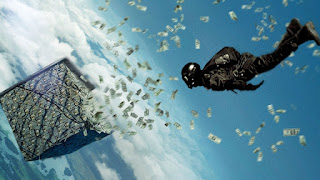 The 2015 issue and remake, Point Break, of the 1991 surfing film which originally starred Patrick Swayze and Keanu Reeve, has kicked things up a substantial notch. Modern special effects and a myriad of amazing on location filming spots has made this action adventure flick a real visual treat. This one is not trying to base it success on a well known and seasoned cast. The film makers are pouring the entire budget into the massive special effects and moving the cast around the world. The locations where the action takes place are wide and varied and include Tahiti, Hawaii, Switzerland, Austria, Venezuela, Mexico, Italy and Germany. Aussie Luke Bracey stars as a newly recruited FBI agent Johnny Utah who quickly infiltrates a crime group who is flitting around the world mixing crimes that benefit mankind with X games style sport in pursuit of the elusive A stuntman's dream the pursuit incorporates sky-diving, free climbing, big-wave surfing, scuba diving, open dirt biking, and BASE jumping. The crime ring boss is a tuned- into- the- mystical anarchist named Bodhi who is played by Edgar Ramirez (the Swayze role). Beyond the pretty scenery and heart stopping stunts, there sadly isn't much more to satisfy a true lover of film. The script is full of holes and a little vapid, the acting carries the story but nothing more. Dialog is somewhat cheesy and approaches canine head tilting status as testosterone flows freely and male bonding and brotherhood rituals abound. The crime group is always too cool for school attitude while exposing mega muscles and tattoos everywhere they go and if one falls by the wayside then they have their own version of a Viking funeral. These criminals are not interested in keeping the spoils of the crime. Instead they want to complete the Ozaki Eight which is eight of death-defying challenges that honor the memory of Ozawki and pay tribute to the forces of nature. In the end, it is a nice visual escape from reality and rather fun globetrotting jaunt via the gorgeous cinematography.
(Review by Cheryl Wurtz)